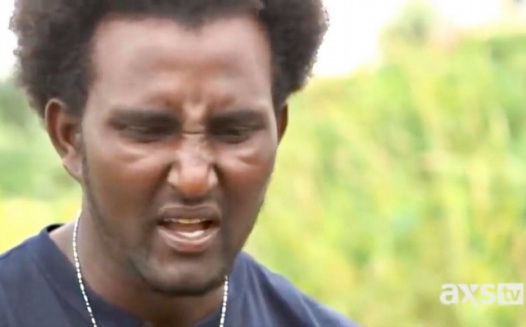 Abebe at the age of seven and two of his siblings were dropped at the orphanage by his uncle following the death of both his parents only one day apart due to illness that had spread in the small town they were living in. Since then they had been taken to six different orphanages where their allegations of all kinds of abuse including of sexual nature. Abebe's life in the orphanage before he was adopted by the Hehn family was filled with starving, not been cared for, or comforted. Abebe and his siblings has experienced many many dead bodies of children taken from their side were they weren't sure they can make it to next day.

After the last orphanage they were in was turned into an adoption house and that where they adopted by Hehn family. Since their life in America with the adopted parent, the Hehn's, was very traumatic, abusive, unattended or supported by the parent because absent for trips for month at time several times a year. There were twenty eight kids in the house with six bedroom only two bathroom for twenty eight kids. It was a given and unavoidable to run in on each other when there was a need to use the bathroom.

On many occasions there were plenty abuse physical and mental abuse on adopted kids by the parent that had the record of 120 plus 911 phone calls that related to this by the house and neighbors, the school teachers and other social workers had documented and alerted authorities their concerns. This had never been submitted to any of his case in the court system in Washington.

Abebe also has suffered mental illness probably resulted from nothing but traumatic experience his life one after another. When he could not take witnessing his youngest sibling’s very traumatic physical abuse by the Hehn’s being suffocated by a pillow and her head against the wall many times and being sat on by the dad while the mom was giving her very harsh beating. The Hehn’s very absent with him calling 911 he was punished by, sent away, laying on him to get him in trouble with the legal system since they know he doesn’t know his right nor had someone to advocate for him. He has signed many documents for the court without really knowing or understanding what it saying about him or he didn’t know what it saying. He had been sentenced and serves time for the sexual allegation that the mother brought up without presenting the medical evidence that exist. Since then, as one could see he had been an outcast in the society and had been homeless for the past ten years. No medical insurance, no Identification Card because the Hehn’s would not give him his paper to this day and also illegally increased his age by one year with fake document to accomplish as an adult convicted the crime that he didn’t do.

Abebe is very polite, law abiding citizen who has been harassed and targeted by the police all his life long. It seems everyone including the court has been unfair and outside of what the remedy the law provides. We cannot help but assume from all the occurrences so far that he has been targeted and harassed by the police everywhere he goes to accomplish revenge for the Hehn’s because she was exposed because his case was exposed nationally including congress.

We here at Network of Family Service Professionals Organization are petitioning the court in Abebe Hehn’s behalf to end unnecessary and unwarranted sufferings that has been levied on him by the court system without considering or giving a chance to present the true nature of his case.

Please find here attached a complete documentary video done by Dan Rather that includes Abebe’s case and we also attached petitions signed with hundreds of signatures from multiple sources including churches and other organizations that are familiar with his life and case here. We hope and pray the court will consider the entire fair to all addressing of the law and also by applying the higher law if where and when the law seems ambiguous. We trust justice and truth will prevail in Abebe’s case and he will get a break for his life to get back to his dream of who he actually is a good, compassionate, respectable, respectful, and productive citizen in a land that he loves so much.

There are many versions of these documentary videos one is the longer version that shows what has happened on International adoption in general and Hehn's family in particular.

Longer version of the video Unwanted in America: The shameful side of International Adoption