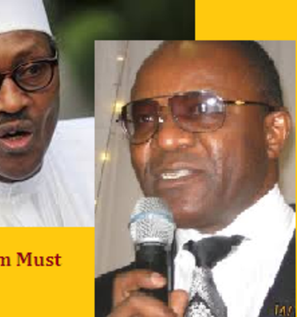 The death penalty prevents future murders:
"Society has always used punishment to discourage would-be criminals from unlawful action. Since society has the highest interest in preventing murder, it should use the strongest punishment available to deter murder, and that is the death penalty. If murderers are sentenced to death and executed, potential murderers will think twice before killing for fear of losing their own life." -- http://deathpenaltycurriculum.org/student/c/about/...

Nigerians have been suffering untold hardship due to nefarious activities of vandalism of our petroleum products pipelines and other critical utilities transmission lines such as electricity/power and water etc.

Consequently, due to these criminal activities of vandalism, for which a lot of people were variously affected negatively, to include avoidable loss of innocent lives and destruction of the environment. We can only realised the heavy weight of these treasonable offences of the vandals when we are able to answer the following pertinent questions:

All these anomalies and many more happened due to the nefarious activities of vandals.

And how long shall we continue to tolerate, very few criminals, holding Nigerians and our great Nation to ransom?

Why or how is it that our armed forces can swiftly kill unarmed Shiite in Zaria and failed to defeat equally treacherous criminals holding guns and other dangerous weapon that they used to kill DSS, Police and oil workers? Or is it a case of "different stroke for different folks"?

Surely, the answer lies in supporting our president Muhammadu Buhari and or any responsible group who are really concern with the need to completely protect our utilities right of way via the use of technology, policies and enacting law via the National Assembly so as to sentence to DEATH any vandal caught in the act of vandalising our petroleum products pipelines and or critical utility lines in Nigeria.

Other Nations of the World have done it and vandalisation had been reduced/eliminated in their countries. Why can't we do the same?

Unless we want to promote a lawless state, I urge you support the articulation and presentation of this deterrent death sentence bill by indicating your support via signing this petition. And also encourage all your friends and family members to support the President in his Change agenda for the good of our great Nation Nigeria.

Make sure you are counted in this 1,000 signatures/petition against criminal vandalisation of our Nation's life lines - utility lines.

Let's save more lives and our scarce critical resources.

For surely, there is virtuous life in deterring criminal-minded people from actions that will take their own lives and that of innocent others.

The references (provided below), in the media speaks volumes about these nefarious activities and which has more than justify the need for the Death penalty deterrent bill, which passing it into law will go along away in reversing these ugly trends.

Pipeline vandals at the Arepo area of Ogun State, today killed 10 operatives of the Department of State Security Service (DSS).

2) Over 100 oil pipeline vandals burnt to death at Arepo

No fewer than 100 persons involved in vandalisation of oil pipelines and theft of Premium Motor Spirit (PMS) were reportedly killed on Wednesday while trying to steal the product from an oil facility at Arepo near Lagos State.

Fresh vista to the fight against the perennial problem of oil theft and pipeline vandalism appeared on the horizon on Tuesday with the disclosure by the Group Managing Director of the Nigerian National Petroleum Corporation, NNPC, Dr. Ibe Kachikwu that the Corporation is working towards the deployment of drones across the nation’s territorial waters to monitor the inwards and outwards movement of oil bearing vessels

The Nigerian National Petroleum Corporation, NNPC, has provided graphic details of how the activities of pipeline vandals have complicated the free flow of petroleum products and crude supply in its pipeline system leading to a colossal cost of over N174.57 billion in product losses and repairs of products pipelines within the last 10 years

Since October 18, 1998, when a pipeline explosion occurred in Jesse community in Delta State, killing over 1,000 people, thousands of Nigerians have lost their lives through pipeline fire and its attendant explosion.