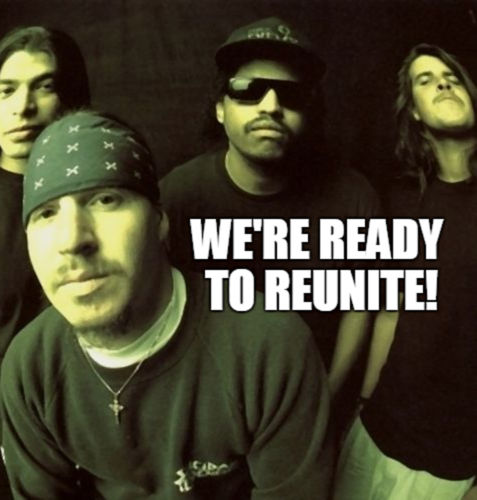 Suicidal Tendencies reunion tour with members of their classic lineup

This is a petition for hardcore Suicidal Tendencies fans who would like to see a full-blown reunion tour featuring three out of five members (Rocky George, Mike Clark and Robert Trujillo) of their classic 1989-1995 lineup.

Even though all the members of the classic lineup are still active and besides a series of one-offs (examples: Trujillo and Muir have reunited occasionally with Infectious Grooves, while Rocky jammed with them for one show back in 2008), there has never been a full Suicidal reunion with a classic lineup. For over the past 20 years, since their split with Rocky and Trujillo, Suicidal's music has been praised by many giants in the music industry, inspired hundreds of great musical acts, and has earned them a huge cult following.

The goal is to not only get as many people from around the world to sign this petition, but to show our support for Mike Muir, Mike Clark, Rocky and Robert, who were all largely responsible for Suicidal's success in the 90's, and help convince them that if they play, fans will be there. The reasons fans need or want a reunion are to show Mike Muir and company that there is a whole generation of people that are dying to see a reunion and another generation that wants to relive the greatness.

Mr. Muir, please consider a Suicidal reunion with an open mind and heart. It's not Suicidal without Rocky, Clark and Trujillo, like it's not Rush without Alex Lifeson or Geddy Lee.