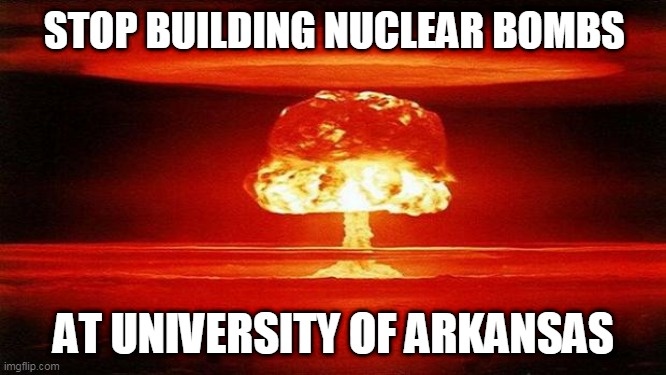 The landmark Treaty on the Prohibition of Nuclear Weapons has now been ratified and "enters into force" as international law on January 22, 2021*. One hundred and twenty-two U.N. member nations, a supermajority, have voted for this treaty to ban nuclear weapons. This January 22nd is a momentous day for peace and many groups will mark this day with celebration and protest.

Indeed, there are billions of reasons to protest. In fact, nuclear war threatens to kill billions of our brothers and sisters through incineration, radioactive fallout and nuclear winter, which would cause universal famine. In his book The Doomsday Machine**, famed Pentagon Papers whistleblower and former nuclear war planner Daniel Ellesberg clearly describes how we are much, much closer to nuclear annihilation than most people comprehend.

The Nobel Peace Prize winning organization ICAN has issued a report titled Schools of Mass Destruction***, which found the University of Arkansas is involved in the production of of these increasingly illegal nuclear bombs. This directly contradicts their core Mission Statement about the U of A being "determined to build a better world".

This petition calls on the University of Arkansas and UA College of Engineering to immediately apologize and cancel the Master Collaboration Agreement**** with the nuclear weapons corporation Honeywell International. This petition will be delivered to the UA administrators on January 22, 2021 when the nuclear bomb ban "enters into force".

**In The Doomsday Machine, Daniel Ellsberg tells of his experiences investigating weaknesses in the command and control of nuclear forces. Many believe the President alone has the authority to launch nuclear war, but this is not the case. The authority to start nuclear war is delegated to high level and low level commanders, which greatly increases our peril. Nuclear war can be started by false alarms, unauthorized attacks, and by accidents. Additionally, Russia offers parallel danger with their Dead Hand system, which automatically triggers full scale nuclear launch, which could occur after a single nuclear terrorist attack on Moscow. Both Doomsday Machines threaten all humankind.

A key idea that was not understood by early nuclear war planners until 1983 is nuclear winter and nuclear famine. The original plans for killing half a billion people were vastly underestimated; they would have killed closer to 3 billion then, and 7 billion now. If the U.S. or the Russians launched thermonuclear attack, it would cause ferocious firestorms in the bombed cities, sending massive amounts of smoke into the upper atmosphere, blocking out sunlight and lowering temperatures worldwide for a decade or more. Within a year or two, this would destroy nearly all plant life and the humans and other animals that require plants for food.

Ellsberg also details that this constant omnicidal threat has continued without interruption by every presidential administration since large numbers of thermonuclear weapons were constructed. Every President since Truman has actually used these weapons, with explicit and implicit threats, as tools for coercion, such as “all options are on the table”. Thousands of bombs remain on hair trigger alert, and the primary U.S. plan has always been full scale first strike decapitation, to obliterate Russia’s ability to respond. This would trigger nuclear winter. Too many rationalize this danger, but as Ellsberg writes, “No policies in human history have more deserved to be recognized as (criminal, immoral, insane and evil).”