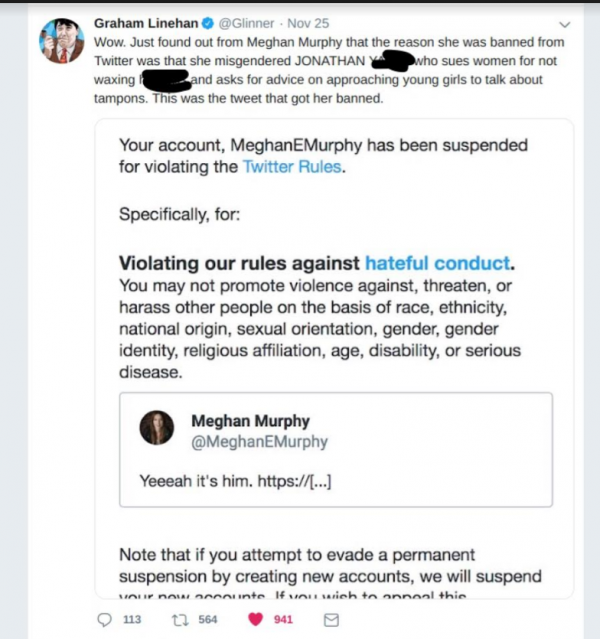 959 people have signed this petition. Add your name now!

Recently, Twitter has been arbitrarily banning women for voicing concerns about the impact of self-identification (i.e. the notion that self-identifying as a woman is sufficient for *being* a woman) upon women, and in particular, concerns about the impact upon women's spaces (e.g. refuges, rape crisis centres, lesbian events), women's sports given the physical advantages a male physique naturally confers, and the rights of women to speak freely in general without professional and personal recriminations. We unapologetically believe that:

1. Alessandra Asteriti (@AlessandraAster) who was banned for stating that in 2015, 300,000 women around the world died in childbirth, and that as such, it is deeply unethical to consider womb transplantation for transwomen - NOW UNBANNED!

2. Jo Bartosch (@CriticalSisters) who was banned for objecting to feminists being compared to Nazi's.

3. Jane Callahan (@cyberfrontier) who was banned for stating that lesbians are "same sex attracted adult human females" (hence, a transwoman cannot be a lesbian).

4. 'ClassyKassy' (@Kassandra50) who was banned for stating that Morgane Oger was born a man and objecting to their on-line behaviour.

5. Claire Graham (@MRKHvoice) who was banned for objecting to transactivists weaponizing intersex conditions for political purposes.

6. Dr Alicia Hendley (@aliciaMHendley) who was banned for objecting to Jessica Yaniv suing sixteen women for refusing to wax 'her' scrotum.

7. Sarah McGurk (@SCMcG) who is presently banned for asking for a definition of woman, pointing out that there are no significant differences between male and female brains, and that women prisoners should not be made even more vulnerable by being housed with biological men.

8. Dr Louise Moody (@drlouiseJMoody) who was banned for joking to a friend that she was going to "literally kill her" for making a joke about Dr Moody's lack of culinary skills - NOW UNBANNED!

9. Meghan Murphy (@MeghanEMurphy) who was banned for referring to Jessica Yaniv as 'he' - a pronoun used by Yaniv himself and a description that was not, at the time of posting, considered to constitute 'misgendering' according to Twitter rules.

10. Pilgrim Tucker (@PilgrimTucker) who was banned for factually stating that, since rape requires a penis, the only women rapists can be transwomen.

IT IS UNCLEAR HOW THE ABOVE WOMEN HAVE VIOLATED TWITTER RULES

In addition, we call upon Twitter to stop requesting that people delete factual tweets, such as Bea Jaspert who was banned for twelve hours for stating that most killers are male and Dr Lesley Semmens who was banned until she deleted a tweet asking how police finding male DNA at a crime scene are supposed to know whether they "are looking for a man or self-identified woman."

It is worth noting that, under the Equality Act 2010, sex is a protected characteristic and Twitter (UK) in incorrectly listing gender in their conduct policy, is in ignorance of U.K law. It is this false equivocation of sex with gender that is ostensibly allowing Twitter to ban women under 'gender identity' rules when they are the protected class.

To protect the interests and rights of women as a sex-class, we must be able to talk freely about issues that affect us and not be compelled to revise perfectly intelligible terms such as 'woman' or 'lesbian'. And Twitter being the 'town square' of the internet should be one such place where we can do just that.