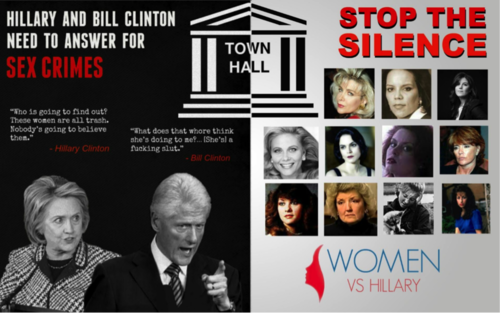 663 people have signed this petition. Add your name now!

For decades, Bill Clinton has been preying on women.

Meanwhile, Hillary has run the cover-up and smear campaigns to discredit Bill's victims and terrorize them into silence using heavy handed private detectives.

She claims she is an advocate for young girls and women, but when she has had the opportunity to stand up for the women her husband has assaulted...Hillary has been worse than silent.

Now, as she is close to securing the Democratic nomination for President...we must STOP THE SILENCE.

Hillary and Bill must answer for their crimes against women!

She will say that all the allegations against her husband are false and that the women are "bitches, sluts, and whores."

With 30+ confirmed victims and counting... WE DEMAND STRAIGHTFORWARD ANSWERS!

How many people have been assaulted by the former President... and how many times did Hillary Clinton psychologically and physically intimidate these victims to KEEP THEIR MOUTHS SHUT?

Sign the "STOP THE SILENCE" petition NOW to tell the Clinton family that you demand answers and a full town-hall Q&A segment.

There, Bill and Hillary can hear from actual sexual assault victims about the damage it has caused their lives.

Hillary... if you truly care about young girls and women, you need to step up and honestly acknowledge you and your husband’s crimes against women.

About WOMEN VS Hillary: We are a group of women dedicated to educating the American people about Hillary Clinton's involvement in her husbands' rapes, sexual assaults, and unwanted advances on dozens of innocent women over the past 40 years.