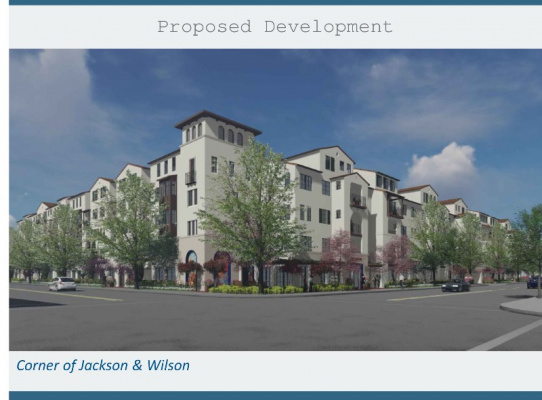 Stop The Sale of School Public Property to Developer and Another Monstrosity in Glendale!

Note: no donation is required to sign this petition.

We, the undersigned, severely affected by the irresponsible, unsustainable, and unsafe overdevelopment in Glendale for the past decade, urge the City of Glendale and the Glendale Unified School District (GUSD) to stop the sale of GUSD’s 3-acre public property (at/near 223 N. Jackson Street) to the Private Developer Carmel Partners, which has aggressive development plans.

Further, we, the undersigned, urge you to stop the Developer's egregious plans of massive demolition and massive construction next to a high school and numerous preschools.

Carmel Partners, which has already built a 5-level 507-unit Altana monstrosity on Central and Doran streets in Glendale (at 526-540 N. Central Ave.), has avid plans to demolish GUSD’s 4-level headquarters and to develop a 5-level 207-unit monstrosity in a purely residential area at the present GUSD’s site. If Central Ave., with its numerous lanes in each direction could arguably support the traffic and parking needs caused by Altana, the same cannot be said about the one-lane (each direction) Jackson, Wilson, and Kenwood streets, which are already heavily traffic-congested, and severely parking-scarce. The proposed Monstrosity at GUSD's site will cause a traffic and parking nightmare for the existing residential and commercial buildings in the neighborhood (High School, Post Office, YMCA, United Methodist Church, Café, etc.). Besides, upon GUSD’s sale, the Alan Daily High School (with over 250 students/staff), which is immediately next to the GUSD's lot and presently shares GUSD's parking lot, will be left with only 13 parking spaces, thereby further aggravating the parking disaster for the school and for the neighboring community.

The proposed Development – in view of its sought double-triple density increase (over 126% more) - poses significant health and safety threats to the neighboring community and to the sensitive receptors (students of the adjacent high school, children of nearby 4 preschools, elderly, Church and YMCA community). Air pollution (associated with over 2-month demolition of asbestos/lead containing 4-level GUSD headquarters, over 4-month grading on a site listed on Haznet as a hazardous waste site, and subsequent two-year construction of monstrosity), as well as the air pollution and greenhouse gas emissions, associated with the foreseeable dramatic increase of traffic (of the proposed Development) threatens with various serious diseases (including cancer). Public services (firefighters, police, EMS), which are already understaffed and delayed in response times, will be further affected by the dramatic increase of density and traffic.

These health and safety threats of exceeding density in the Downtown Specific Plan (DSP) area (next to GUSD's site) have, in fact, forced the City of Glendale to adopt a Moratorium on March 27, 2018, for a full year, in order to suspend all residential developments and to revise the development standards to address those concerns.

Moreover, the proposed luxury Development, with its rents starting at $2,600 for a studio, will further push up rental prices and aggravate the housing crisis in Glendale.

Lastly, South Glendale has a dire need for parkland and recreation space (over 600 acre shortage), whereas GUSD’s public lot is a perfect location to create a park in South Glendale so needed for the community and long promised by the City of Glendale. It is also the requirement of the Education Code that GUSD offer its property for sale to public agencies primarily for park, recreation, and playground purposes; GUSD is violating the Education Code requirement and thus depriving the community of its warranted benefit. GUSD is committing waste of public funds and public property by illegally selling its land to a developer.

In view of the above mentioned, we, the undersigned, urge both GUSD and the City of Glendale to stop the sale of public property at 223 N. Jackson (and adjacent properties on Kenwood, Jackson, and Palmer Streets) to Developer Carmel Partners and to reject the Carmel Partners Project.

2) GUSD’s sale is in violation of California Environmental Quality Act (CEQA) requirements as it has not duly assessed (nor informed the public about) the adverse environmental impacts;

3) GUSD’s sale is a waste of public land and public funds, whereby GUSD will be giving away over 3 acres of land (with numerous buildings) plus $7 million cash - for just 1 acre of land (with one building); moreover, GUSD’s inflated retrofitting costs for the current headquarter building - unsupported by bids or hard estimates - are not a proper justification for the sale. Also, GUSD will incur over $5 million in expenses to move to the new place, as well as will pay over half a million dollars to the real estate broker Sam Manoukian. All public property and public funds!!!;

5) GUSD’s sale poses health and safety risks to the students of the adjacent Daily High School, who will have to endure the air pollution (asbestos, lead, dust) from the demolition and construction, and then be trapped in between 60-feet-tall walls of the development, which will impede the proper response of firefighter, police, or EMS, in case of emergency.

6) the proposed Development, in its mass and scale, is inconsistent with the Glendale General Plan and R1250 zoning requirements set forth in Glendale Municipal Code Title 30 (20-26 feet street front setbacks, maximum of 3 levels and 36-feet height, maximum 50% lot coverage (including all residential and accessory buildings), minimum 25% permanently landscaped open space, 1.2 FAR, etc.). The Proposed development is seeking reduced street setbacks, a 5 level building, 60 feet height, does not provide the 50% maximum lot coverage and the required landscaped open space, and doubles/triples the Floor Area Ratio, and even requests a zone change for mixed use! Albeit not asking for a zone change, the Developer is essentially seeking all the benefits of a zone change;

7) the proposed Development on the public land, which is one of (if not the only one) the few open spaces left in South Glendale, will further exacerbate the dire need of South Glendale for parkland and recreation space; in the meantime, GUSD’s lot is the perfect spot to develop a park, playground, and a recreation place to benefit the adjacent school and South Glendale community;

8) the proposed Development, due to its close proximity to the DSP area, will dramatically exacerbate the undisputed health and safety concerns in and near the DSP, as acknowledged by the City of Glendale through the adoption and extension of the Moratorium;

9) the proposed Development will severely and irreversibly affect the quality of life, welfare, health and safety of the neighboring community (which has already borne the enormous irreversible cumulative impact of the DSP's senseless developments), and will severely cripple the operation of adjacent commercial institutions, by dramatically adding traffic, exacerbating parking shortage, and causing attendant air pollution and greenhouse gas emissions.