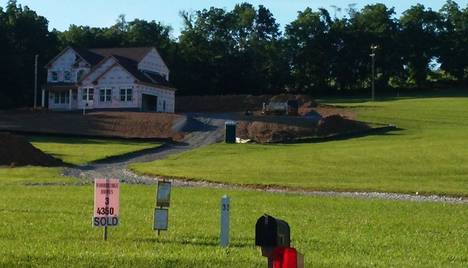 Stop the over-development in Frederick County

I live on the border of the beautiful towns of Middletown and Jefferson. Lately, I have become concerned about the amount of houses being built on farmland, yet there are so many houses for sale. In Middletown, there are over 150 houses for sale! In Glenbrook- about a quarter of the houses are being put on the market. In Frederick County alone, about 3,286 houses are for sale! Yet despite all these available properties, developers are going to be putting up more houses in Middletown, Jefferson, and Frederick. In a field right by the Middletown Elementary school, 83 houses are being planned.

Middletown is supposed to be a kind of farming town, and where I live, between Middletown and Jefferson, it is exceedingly pretty. But farmers are selling land, so that houses can be built. I think this is very unfortunate, because in future years, Middletown is bound to be a glum, immense housing development, with our schools surrounded by more and more houses.

What I don’t understand is why do we need to build more houses when there are plenty for sale that are brand new, some having been on the market for over six months.In Middletown there are 129 houses for sale,Jefferson, 53 homes and in Braddock Heights, there are 6 homes for sale. Braddock Heights is a great location, with a pool nearby, and historic homes. Also, the homes in Braddock Heights are beautiful to look at, and unique to one another. Houses in new big developments, like Glenbrook, usually look the same, with a decorated front and a boxy back that has no glory at all, whereas older homes are pretty on all sides, since they took longer to put up than the mere week it takes to erect the frame for the houses now.

Even if some people did move into these developments, it will probably be empty for the first decade or so. In areas where I have seen new condos, or apartments, or houses, they are not buzzing with cars, but often stand with empty parking lots.

If schools in Middletown have fewer kids coming through the younger grades, and they are cutting teachers from the system, why build more houses when there aren’t even enough people and kids to go around? What if we kids don’t even want t live in an ever-developing town which will be more and more polluted because of all the buildings, cars and machinery? I know I certainly don’t.

Middletown has a slight shortage of water, so this will just increase the demand for water, which will definitely not help us.

Please sign this petition to stop additional building, or at the very least pause it to let people buy the houses that are already for sale, so we stop destroying our beautiful fields and using up our already strained resources.