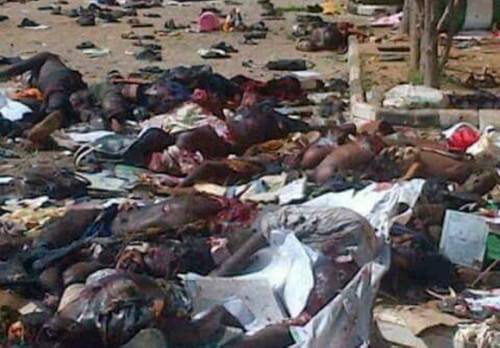 STOP THE KILLINGS, SAY NO TO THE GRAZING BILL

“STOP THE KILLINGS” AND “SAY NO TO THE GRAZING BILL “

We, the Signatories to this petition, request your EXCELLENCY, the President -THE EXECUTIVE, the Senate PRESIDENT-THE NATIONAL ASSEMBLY and the Chief Justice of Nigeria -THE JUDICIARY to provide security for EVERY person resident in Nigeria as every Life matters.

The Nigerian state is predominantly Christians and Muslims. In recent years, there has been what may be referred to as “community cleansing “ by the Fulani herdsmen. These multiple attacks on villages and communities have gone on without any reprisal from the government. The government has remained quiet and unresponsive at each and every attack.

From Nasarrawa, Benue, Plateau, Enugu, Taraba, and Kaduna states; there has been killings upon killings of hundreds of thousands of Citizens of this great country, Nigeria and we are still counting as the government has not taken steps to prevent this recurring event and we do not know which state will be next. If the government continue to keep quiet the entire country Will be engulfed in a guerrilla warfare because the people will soon resort to self-help when the government sits with her hands folded. This is NOT the country we want. We don’t want a shredded country handed down to us young people; we say STOP THE KILLINGS.

WE SAY NO TO THE GRAZING BILL

The “grazing Bill” is a bill before the National Assembly that has passed the second reading! This bill seeks to establish a commission that will create grazing reserves and routes in the 36 states of our Country-Nigeria. The commission is to acquire lands in all the 36 states and only “compensation necessary” will be paid to people with interest in such land. This bill does not specify which animals are to benefit from the reserves and routes but we all know that these reserves and routes are for the cattle rearers only. Other animals don’t need grazing reserves and routes to grow. We as Nigerians believe to that this bill is anti public interest. These land belong to every citizen of this great Nation and the Land Use Act which regulates the alienation of land says, the state government holds this lands in trust for the people! So, the government is only a TRUSTEE and cannot do as she wills with this property!

We want to be heard ,we want to partake in the alienation of this gift of nature to every free born of Nigeria, we demand to be taken along this journey of passing, if at all, the grazing Bill.

The greater good of the Nigerian society is paramount and supersedes the desires of a few individuals. The Government's primary job is to manage competing interests in line with the letter and spirit of the law. Nigerians reject this bill in its entirety and call on the Legislature to represent Nigerians in line with their job description.

1. Equip intelligence departments to function optimally so as to anticipate, intercept and prevent future attacks

2. Provide security personnel to all communities and villages in Nigeria to protect Citizens

3. Organize Town hall meetings in all communities and villages to discuss and deliberate on the proposed “Grazing Bill “

4. Call for a referendum for the acceptance or otherwise of the proposed grazing Bill by the Nigerian populace

5. A stay of proceedings on the proposed grazing Bill before the National Assembly

6. Make a PRIORITY the life of every Citizen as every life MATTER.