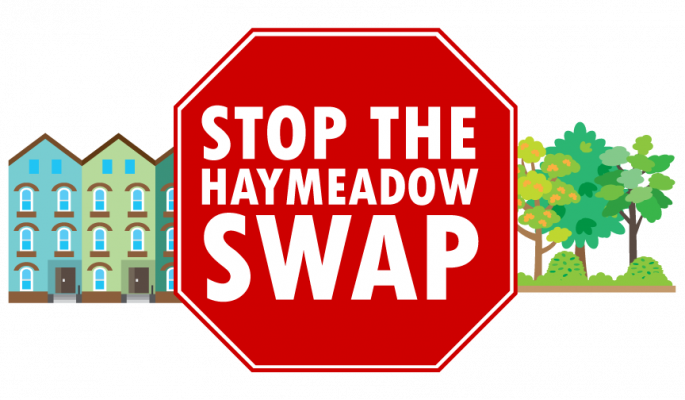 We, the undersigned, vehemently oppose the planned site swap proposed by the Haymeadow Developer. The Developer proposes taking the current school site and swapping it with one close to a mile away. In the original school site, the Developer would like to build approximately 200 multi-family units that are three-stories tall.

The Developer would like this swap to happen because the infrastructure that is currently in place does not reach where the multi-family units need would be, and he will build the inexpensive units to sell them to fund the next stage of the development.

The original site was chosen for the school to decrease traffic and to share facilities and fields with the Town of Eagle and Mountain Rec. The school kids would be able to have walkable access to fields, bike trails, playgrounds, skating rinks, skate parks, and more. By moving the school a mile away, this all but eliminates the possibility for Eagle's children to benefit from the Town's vision. Additionally, by having the school in its planned location, the Town of Eagle will be able to host even more bike and hockey tournaments, thus bringing in significant revenue.

In the original school site, these multi-family units will not conform to the Elevate Eagle plans in a variety of ways (density, look, feel, location relative to I-70 and business and bus lines, intention), including offering enough parking. They are claimed to be workforce housing, but there is not a single bus route that goes through Eagle Ranch.

The only reason that the Developer is proposing this swap is because of his mismanagement of the construction process and his inability to oversee a construction project of this magnitude. The only person who benefits from the swap is the Developer--not the people of Eagle.