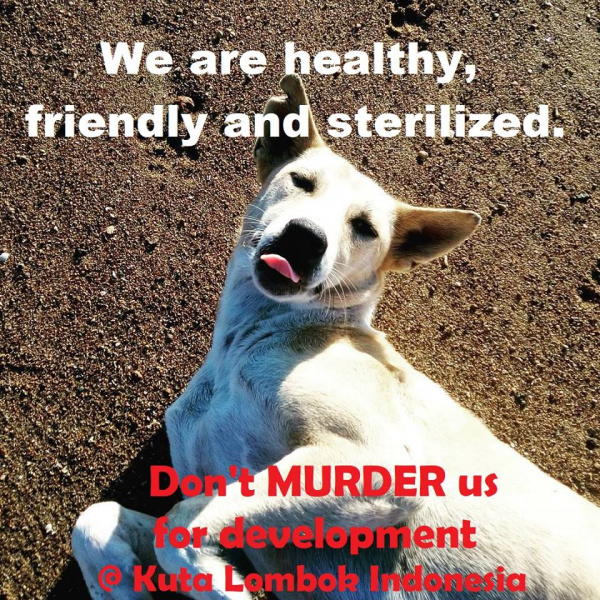 Stop the cull of healthy sterilised dogs in Kuta, Lombok!

In the past week, a significant number of healthy stray dogs have disappeared over night, in the Kuta, Mandalika area, leaving streets and beaches deserted. Some people have lost their beloved pets! This comes following a meeting earlier this month where ITDC indicated that if the dogs could not be removed from the area that they would be eliminated.

Nearly 300 of the local strays have been sterilised by Kuta, Lombok Dogs, through donations by locals, expats, visitors to Kuta and dog lovers, worldwide. That is nearly Rp200 million worth of surgery.

Should ITDC remove or eliminate these dogs it will just clear the way for unsterilised dogs to move into the area, wasting all the money and efforts of the community so far and also defeating the purpose of ITDC as it will see an increase in the dog population rather than a decrease.

Many local citizens own dogs as pets and view them as a part of their family. We are all very worried for the safety of our dogs and we would like to urge ITDC not to continue with this cruelty.

For people of any religion or culture, we feel it is inhumane to poison animals.
Also, the risk for other casualties (such as pets, farm animals, etc) is very high when poison is distributed in town!

The negative publicity from this would severely impact local businesses as well as ITDC plans.

We would like to invite ITDC to work together with the local population and local organizations, such as Kuta Lombok Dogs to work on the problem together. We hope, by working together, to find an acceptable solution for all parties involved.