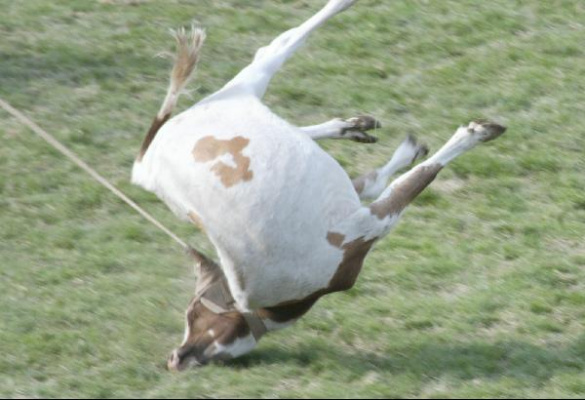 Steer Roping (aka Steer Busting) is an event in which steers get dragged by a rope which is meant to land on their horns but usually lands on their sensitive eyes. A cowboy riding a horse throws the rope at the steer, and while the horse drags it, his mission is to tie the steers feet together. Steers understand the danger they are about to face because they have to go through it more than once. Due to them understanding, they sometimes refuse to come out but end up getting shocked or getting their tails twisted which is said to be as painful as bending three of your fingers back. Did you know "Steer Roping" is the event with the highest number of sacrificed animals in any rodeo event? This cruel event is banned in most states because it is very dangerous for the innocent animals. Unfortunately, however, this event is still being practiced in New Mexico. Many may think it is under control and no one gets hurt because the injuries and deaths of animals are hidden and never told to the public. The ones who control this event also state that animals get the "care" they need after being injured but many don't even get treated and/or may even be left to die. Regardless of whether they get treated or not, why is it okay to hurt an animal as long as it gets treated after? Wouldn't this be equal to me abusing my dog but it being legal just because I take him to the vet after I hurt him each time? During this event, they also prohibit recording because they want to avoid people having evidence of the violence. Help stop Steer Busting by simply signing this petition. Make a change! Care for these animals who aren't able to defend themselves and need us to stand up for them!!