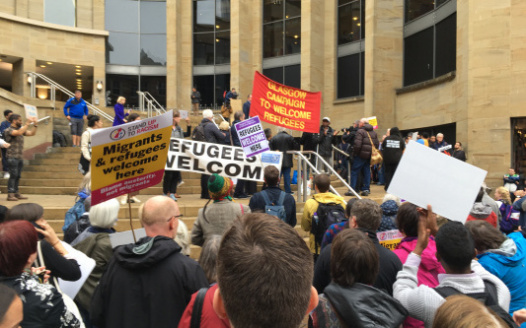 As Labour Party and trade union activists in and around Glasgow we condemn Serco’s recently announced policy of lock-changes on asylum-seeker accommodation.

We fully support campaigning, including non-violent direct action, to prevent implementation of that policy. We therefore welcome:

- Statements by elected Labour politicians to that effect.

- The emergence of a network of organisations and activists across Glasgow committed to ensuring that no evictions take place.

- Steps already taken by the Scottish Labour Party encouraging members to attend anti-Serco protests and to help prevent evictions from going ahead.

Campaigning in defence of asylum-seekers should be part of a broader transformation of our Constituency Labour Parties into campaigning organisations – rooted in our communities and local workplaces, and standing alongside of them in their struggles.

We therefore urge Labour Party and trade union members to mobilise in defence of asylum-seekers threatened with eviction, not just in the political arena but also on the streets.

All signatories in a personal capacity:

To invite a speaker to a CLP meeting to discuss Serco’s treatment of asylum-seekers, contact the Asylum-Seeker Housing Project, which has a well-established record of supporting asylum-seekers in Glasgow: contact@ashproject.org.uk