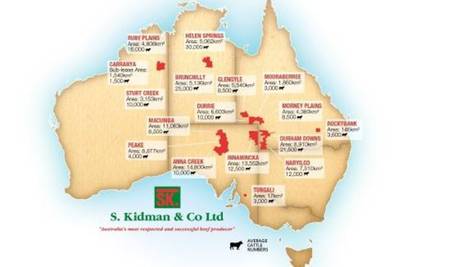 I am calling on you to help reform our sales of land to foreign investors:

Australia’s largest rural land holding (the Kidman holdings) is up for sale (see map). As a citizen of Australia this and many other sales deeply concerns me. If we sell our land to foreigners we cannot dictate that they employ Australians, or who they sell their produce to. One large Chinese investor was quoted as saying "A key aim of Dashang Group's investments in Australian agriculture is to provide Chinese consumers with the highest-quality Australian beef” It is evident that the foreign companies have worked out that we don’t have a say, surely it is time that our governments did too! Once we have sold the land it is gone forever!

In doing an internet search on foreign holdings in Australia I also discovered that China has a large amount of land on our northern boarder. With the port of Darwin leased to China for 100 years and other land holdings it will make it very hard to defend ourselves if a war occurs – god forbid. Worse still what if the war is between China and America. I know that sounds a bit dramatic but a lot can happen in a hundred years, we are now on friendly terms with Japan and Germany who were our sworn enemies.

With the world population growing at such a rapid rate our land is essential for the production of food. If we have the land we can put ourselves in a very good position to feed the world and strengthen our economy, but the government is sending us backward. We will be a country crying out for the food even though we are surrounded by the foreigners “making hay” in our backyard!

Here are some foreign owned land holdings that I identified in a short search - this is by no means a comprehensive list.

3 S Grenville, 24 November 2015 10:00AM “The interpreter, Chinese investment in Australia: Sometimes it makes sense to sell the farm”, The interpreter