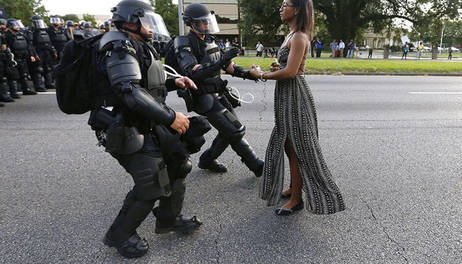 Heritage High School prides itself on exemplifying a learning environment for its students. There have been many times where they have permitted freedom of expression, such as when a teacher dressed up as Trayvon Martin, clad in a gray hoodie with a bag of skittles in his hand for his yearbook picture. Amid the controversy, people generally revered the school for allowing its staff and faculty to express themselves freely.

Recently, the school has deviated from its stance on the freedom of expression. One teacher at Heritage, co-advisor to the Black Student Union, has posted posters in reference to the Black Lives Matter movement.

The school has told the teacher to take the posters down, fearing that they will make students uncomfortable. There are 5 posters in question: a poster that reads Black Lives Matter, a poster that reads Blue Lives Matter, one that reads about the murders of Alton Sterling and Philande Castile, an image of the Reverend Doctor Martin Luther King, Jr. in a hoodie similar to Trayvon Martin's hoodie, and the image of Louisiana state police in riot gear taking away a black female protestor standing gracefully in the middle of a road.

The nature of the posters are not offensive. Despite the polarizing nature over what color lives matter, the issue goes further than that. These movements spark debate, and what better way to discuss such issues than in a school environment? I ask that you sign this petition to prevent the unjust censorship of academic freedom.