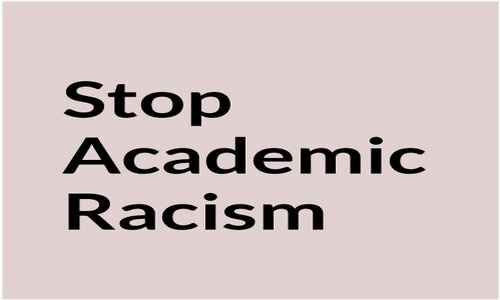 Prof. Ismail, a Sri Lankan Muslim, has a history of racism in and outside the classroom. Given existing racial and religious tensions in America, we call on Minnesota state and federal officials to investigate and take appropriate action to stop him from using his academic credentials for inciting hatred against targeted religious and racial communities. Such a hate-filled arrogant teacher, given the tremendous influence he has on young minds, should have no place in today’s academia.

“His worldview revolves around racism & he is deeply ingrained in his own opinions. He made rude jokes about conservatives and Christians. He has little clear grading criteria, & is a scary & difficult person. Class was survivable but traumatic.”

“This guy hides behind his tenure status and bullies students. Roughly half my class turned him in for inappropriate comments and behavior…. File a grievance, don’t be afraid of him..”

“Qadri was hands down the most arrogant and insufferable teachers … used the fact that he was tenured to say he doesn't care if everyone hates him. He pushed his opinions on everyone and was personally insulting to me in particular.”

A wink and nod to Jihadists

Barely two weeks after the deadly Easter Day bombings by Islamist terrorists that killed 269, including Americans and maimed over 500 in Sri Lanka, Prof. Ismail faulted no one but the Sinhala Buddhists for the deadly carnage: “There isn’t now and never has been a terrorist or national security problem in Sri Lanka. And we’ve faced just one catastrophe: Sinhala Buddhist nationalism. (From casualty to catastrophe) he declared giving a clean bill of health to the Tamil Tigers terrorists who waged a 30-year war that killed thousands of Sri Lankan civilians from all ethnicities, and Muslim terrorists who had just bombed hundreds of Christians as they knelt in church.

To justify hatred for Buddhists, he dwells extensively (in several articles) on two monks whose controversial views have remained on the fringes, as evident from the recent polls in which they were clearly rejected by Buddhist voters. It’s like judging black American leaders using Louis Farrakhan as the yardstick, or white Americans by the wildly xenophobic statements of some fringe Christian groups.

He also accuses Sri Lanka of Islamophobia, a distinctly American phenomenon, taking examples, again, from just those two monks and the temporary ban of the hijab in public imposed by the Sri Lankan government following the Islamist terrorists’ bombing. “The Muslim is today’s object of the Sinhala nationalist war of terror.” The blame, thereby, is nicely shifted: another wink and nod to Jihadist killers.

“My mother often told me Sri Lanka was not our country. We were Muslim, and no doubt also Moor – remember those people? they’ve disappeared – and didn’t quite belong here.” On (Not) Knowing One’s Place published by the International Center for Ethnic Studies, Sri Lanka

Which suggests there are no more Moors in Sri Lanka! Far from disappearing, Moors’ (Muslims) numbers have grown, from 5.9% in 1963 to 9.3% in 2011. Countless Muslim politicians have been elected to parliament and Muslims have distinguished themselves in numerous fields. In fact, the very Rajapaksa administration which Ismail “F*** You’d” has appointed a Muslim lawyer to one of the highest positions in government -- minister of justice.

Ironically, the feeling of not belonging didn’t stop this family from enjoying numerous benefits, including that prized free education Ismail received at the prestigious University of Peradeniya.

With such a history of racist rhetoric, allegations of classroom bullying, and outrageous distortion of facts, Qadri Ismail does not deserve a place in academia. No student should be exposed to such a bigoted professor.

We call on Minnesota State officials and elected representatives to initiate appropriate investigations.

FACTS ABOUT ISLAM IN SRI LANKA

University of Minnesota Professor Qadri Ismail claims Muslims have disappeared from Sri Lanka while accusing the Sinhalese Buddhists of discrimination. Following are Facts about the status of Muslims.

Schools with Buddhist background, but not religious schools – 37

Islam (on par with Buddhism, Hinduism, Christianity) is taught in schools as a subject for General (GCE) Examinations

Sri Lanka is one of the few non-Islamic countries with an Islamic banking sector, which started in 2005 and took off in 2009 (during the Mahinda Rajapaksa government) with the entry of Amana, a fully- fledged Islamic bank. That increased to two windows owned by state banks, 14 windows owned by private banks, and three Takaful (Islamic) insurance companies and four shariah-compliant unit trusts.

Status of Buddhism versus other Religions

Constitution adopted 16th August 1978. Article 9 falls short of establishing Buddhism as the state religion; the provision gives Buddhism the “foremost place”, making it the duty of the state to “protect and foster the Buddha Sasana”. All religions are afforded Constitutional protection under Articles 10 and 14(1)(e) which guarantee personal freedoms.