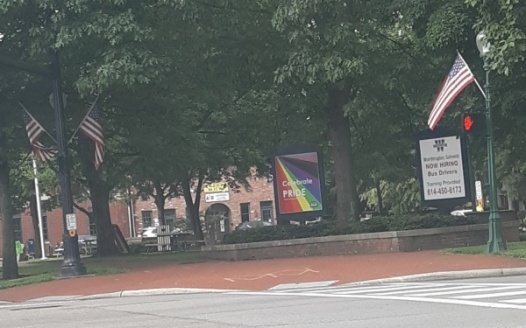 The City of Worthington, Ohio has advertised publicly their stance and support of the so-called "Pride month" or "LGBTQ+ month" The City, ignoring the philosophies and religious objections of many of their constituents, has posted a large sign stating, "Celebrate Pride" at the major intersection of 161 and High Street. This signs letters are placed in the background of an array of colors most-likely representing the pride rainbow flag.

The posting of this sign flies in the face of Judeo-Christian teaching as well as other world religions. For a city to make such a bold stand in the face of many in the populace who do not celebrate nor encourage gay-pride month is an insult to those with alternative positions.

To openly advertise such a divisive ideology should not be the work or goal of the City of Worthington. Such would be the same for almost any other major political or ideological movement. Although many who disagree with such a lifestyle would never think to harass, intimidate, or harm any member of the LGBTQ+ community; it should be noted that condemning the flaunting of such a lifestyle is not violence or harassment. Instead it is a call for general decency and some political neutrality in regards to displays created by elected officials and made with tax dollars.

Furthermore the display is offensive in that:

I) Said display is in a public arena under the view of children. Children do not need to be tipped off on various sexual behaviors and sexual deviance.

III) The LGBTQ+ community in itself is highly questionable in regards to its moral compass and acceptance of basic biology. Denying their own basic biology some regard themselves as another sex from the one given them at birth. Some advocates of this community go so far as to advocate for explicit sex education to young children as well as gender dysphoria theories. Worse, some LGBTQ+ advocates encourage impressionable young children and teens to undergo hormonal therapy; or worse yet surgery that butchers the beauty and uniqueness of their God-given bodies.

IV) For those who have a religious and/or philosophical objection to the LGBTQ+ lifestyle it is an insult to them to have such an objectionable lifestyle pushed upon them. No one should be forced to believe in a certain doctrine or way of life. By openly supporting "Pride Month" the City of Worthington is forcing its residents of all stripes to be force-fed a particular agenda.

V) Let us not forget that each month of the year holds some special observance for organizations and philosophies. At no time is National Safety Month or National PTSD Awareness month observed as well as the many other month-long observances in June that could happily replace Pride Month. *