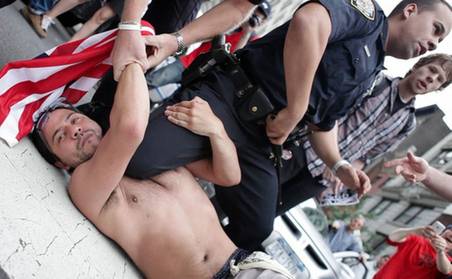 Please support the Accountable Authority Act to stop police misconduct. This will solve the problem of what to do with the "bad apples" in law enforcement. We need signatures from all 50 states. We are actively looking for support from legislators in all 50 states to sponsor and support this bill. Here are some of the main problems it fixes:

1) Allows civilians to prosecute police officers when the government refuses to prosecute it's own, provided there is enough evidence.

2) Removes immunity from prosecution for officers who violate the law while on the job.

3) Creates civil liability for officers for misconduct, payable to the victim of the misconduct for minor offenses such as performing an illegal search or attempting to disarm their video recording devices. Currently there are no repercussions for officers breaking these laws.

4) Doubles penalties for crimes committed by officers whose victims guard is down because of the officer's position of public trust. This would focus on crimes like rape, robbery, extortion and murder.

The full text of the bill is below. Learn more at AccountableAuthority.com