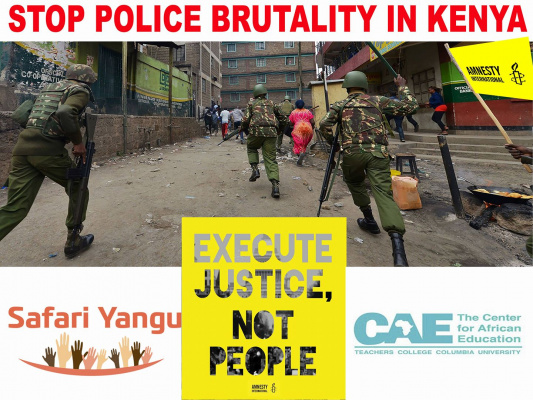 I am gravely concerned to receive reports of the police’s unlawful use of force against protesters and bystanders in Kenya, particularly in the western city of Kisumu in August and October of 2017, in what appears to be a deliberate campaign to punish inhabitants for continuing to protest amid chaotic elections. I was particularly concerned that protesters and bystanders were fatally shot, severely injured, and tortured. Kenya is one the signatory of international instruments that protect human rights of Kenyans as a people on all of the cases of intentional beatings and extra judicial killings that are taking place in the country. Extra judicial killings, torture, and police brutality taking place currently in Kenya amount to violation of the rights of the individuals, have raised these concerns. Kenya’s obligations under international law (including the International Covenant on Civil and Political Rights (ICCPR) and the African Charter on Human and People’s Rights as well as the convention against torture are to respect, protect the right to life and human dignity and also to ensure that no one is tortured under any circumstance, or arbitrarily deprived of life.

I demand that victims of police killings have access to a remedy and reparation and that the perpetrators are held accountable. I demand the establishment of an independent judicial commission of inquiry to examine the activities of the police in responding to protests following the controversial election of August 8, 2017 and October 26, 2017. I urge you to publicly acknowledge and condemn the unlawful police use of force in Nairobi and western Kenya; to direct police and other relevant state agencies such as IPOA to urgently and properly investigate killings by police and use of excessive force in Nairobi and Nyanza during post-election. I seek your assurance that civilians in Nairobi, Kisumu, Migori, Homabay, Siaya and Kenya as a whole, will be treated fairly and humanely in accordance with international and human rights law.

I also demand that, the three major TV stations, KTN,NTV and CITIZEN be switched back on, stop harassing the journalists and opposition political leaders. I demand the release of all political detainees and if they have broken the law, take them to court. The government must respect our constitution at all times.