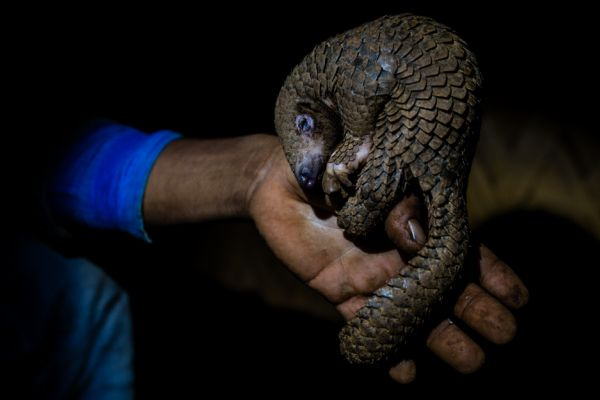 Poaching is damaging our planet, the earth, and people are still doing it, even if it is illegal in some places in the world. Even worse: Some people are doing it secretly. Poaching is illegal animal hunting, and it happens too much. People poach animals for medicine, soap, fur carpets, boots and jackets, and more illegal animal products. They can also do it for meat as well. Poaching can be extremely cruel to lots of animals such as one of the world's most trafficked animal-pangolins, because first people beat up the pangolin until it can barely move, then they boil it alive. Ow! For shark fin soup, people cut off the shark's fin then throw it back in the ocean or leave it on land to die slowly and painfully. Terrible! Also, for elephants and rhinos people cut off their ivory horn and tusks and shoot or leave them to die! Dreadful! Poached animals don't even harm us, and yet we harm them, and we can so cruelly. The only reason animals attack us is for defence, protection of other animals, or for food if they are really desperate. We don't even need to poach, we can become vegetarian or we can eat less meat! There are lots of other ingredients that keep our medicines and soaps just as healthy, amazing, and clean! There are also lots of other good materials to make clothes, shoes and jewellery which make them just as good looking, shiny, and comfortable! So, why bother buying illegal animal products? You certainly don't need them! Also, if everyone won't buy illegal animal products or eat as much meat as they do know, there won't be any use of poaching! We don't want to be cruel to animals, we don't want to bring more species and animals to endangerment and maybe even extinction! If more and more species die out, our animal and nature, basically organism cycle will fall! We don't want to not exist, we don't want earth to be empty do we? Well, then, let's stop poaching! This will not stop poaching, but it will make a difference! If you help me sign this, you will do a big favour about stopping poaching!