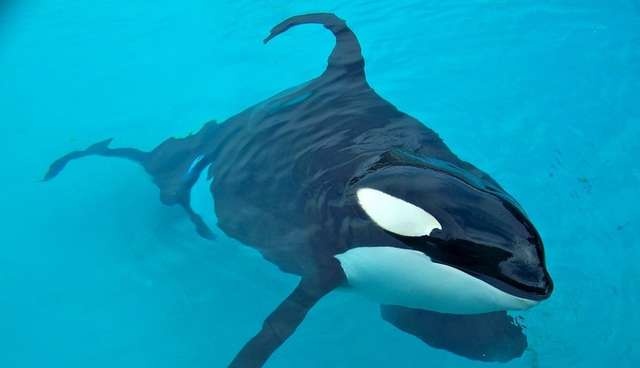 Over 50 orcas are held captive and forced to do tricks all around the globe but this activity is bad : orcas have been fed psychoactive drugs, badly scratched (animal cruelty) and put in small dark spaces for the night. One whale (Tilikum) who was the star of the anti-captivity documentary Blackfish showed his rights for freedom.

Tilikum killed trainers (the most famous, Dawn Brancheau), he decapitated someone, drowned someone and drowned a man who broke into the park after hours (Daniel P. Dukes).

Ksatka had jut performed a show back in 2006 and her trainer (Ken Peters) had just dived into the pool and seconds after diving in Ksatka seizes Ken Peters’ foot and drags him to the bottom of the pool. Ksatka let go picked him up dragged him back down for 1 minute and dragged him to the top of the pool ken breathe stroked the whale and let go of one foot and grabbed the other and dragged him down for another minute and the crew around the pool put out a float line and Ksatka let go of Ken Peters Ken climbed over the line and swam like a demon across the pool. Ken survived but had injuries to his feet.

The way they capture the orcas is emotional, the boat crew trap the whole pod and capture the young orcas which isn’t natural because some orcas stay with their mother their whole lives and never leave them. The mother and pod make crying noises and try calling their captured calf. When a whale is witnessed a baby or juvenile taken away and think of the calf or juvenile when its in a net when there used to being in the open ocean then concrete walls and glass with thousands of people staring into their scared sad eyes every single year.

Marine animals suffer the exact same fate such as turtles, belugas, dolphins and now orcas. Although setting them free is a good idea it could be fatal as it was for Keiko who played the orca Willy from “Free Willy” who was free in the film but in reality not so much. The tank was as small as it looked in the film and had ulcers around his fins from the hot water that was too hot for an atlantic orca so people tried to force the park to free Keiko and children won the rebellion to free Keiko. First they had to train Keiko to be whale which was difficult but Keiko was eventually set free. Keiko never found his pod/family and died 5 years later after being monitored. All orcas in captivity are different in a way maybe there scared or vicious or sad but no orca is aggressive its just depressed, angry and sad and no orca belongs in a tank or lagoon.

All orcas in captivity are different in a way maybe they're scared or vicious or sad but no orca is aggressive. It's just depressed, angry and sad and no orca belongs in a tank or lagoon.