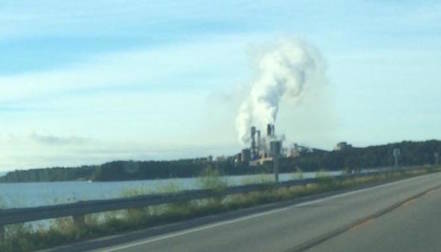 STOP the use of Glyphosate in Nova Scotia!

Northern Pulp ( Abercrombie ) along with Century Forestry Consultants, J.D. Irving Ltd., Wagner Forest Management, Precision Vegetation Management and Compass Forestry Ltd have been given the go ahead to spray more than 1,300 hectares of woodland in Colchester and Halifax counties. The areas include: Tatamagouche, Brookfield area, Truro, Hopewell, Bass River, Debert and Burnside in Dartmouth.

Nova Scotia has one of the highest Cancer rates per capita in Canada, why would we allow Northern Pulp and others to spray glyphosate? VisionMax at that, which has other ingredients more dangerous than glyphosate. The World Health Organization’s cancer agency released a report in March 2015 that declared glyphosate a 'probable human carcinogen'. While others suggest it's 'unlikely' to cause cancer? Unlikely.... that makes me feel better ~ NOT!

It’s going to affect animals, bees and pollinators. As glyphosate is applied to our forests, it will get into the soil. How can it not enter our water supply and in turn, we as humans will drink it? Or ingest after eating berries, contaminated fish or hunting other animasl that have been in contact with glyphosate?

Not to mention the Spruce Bud Worm infestation currently going on in Northern New Brunswick. The amount of so huge when migrated they were picked via weather radar. Spruce Bud Worm look for softwood. If that's all that's left in our forests, we can expect a visit; I'm sure! We need to get back to Acadian Forests; sustainable forestry. Spraying chokes out diversity and ruins habitat. Just look at the deer population for one example!

I am hoping if enough signatures are received. We may be able to stop them, if not now then in the future.

Please sign this petition and share!!! Spraying was approved August 31, 2016 by our Minister of Environment Margaret Miller and her team. Northern Pulp along with the other companies have until October 10 to finish the spray. If we cannot reverse the decision maybe we can stop future spraying!!

Do you live next to an area that will be sprayed with Glyphosate? It seems that there is some small print in the approval form given to Northern Pulp and others that are spraying Colchester and Halifax County with Glyphosate that states ~ they must give notification in writing to anyone living within 500 meters of a spray site. It also says you can request advance notification (No.19) if you live in the vicinity. Worth a try for all interested parties, contact your local Department of Environment.