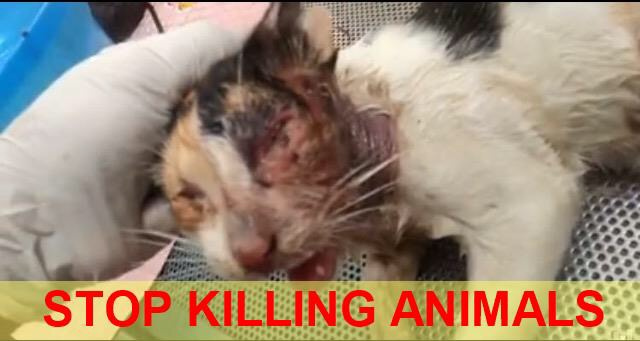 In Sri Lanka it is illegal to kill Dogs.

23 Dogs were stabbed with poisonous substances in the Moratuwa University and also 10 cats which included a mother cat. University students had recovered the bodies of these animals buried in a pit. Many animals that were still alive has been seen wondering in a daze. How awful and heartbreaking is that? They can't speak to ask for help?

Some of these dogs were spey/ neutered by rescue organisations.

This is not the first time the Minster had killed dogs.Mainly done without the knowledge of the community. Hiring people to kill Dogs were published in the newspapers.

Few months ago Sri Jaywardnapura Kotte University. 100 dogs/cats were also rounded up and killed by the same Minister's order.

Many dogs were rounded up using nets and transported in broad daylight to a destination unknown and their fate unknown.

2000 Dog skulls were found in remote bush land few months ago, later the Government using the excuse they were not Dog skulls but Goats.

We are demanding the Sri Lankan Government to STOP killing off man's best friend.

Please sing our petition to help our beautiful Dogs.

We are their only voice.