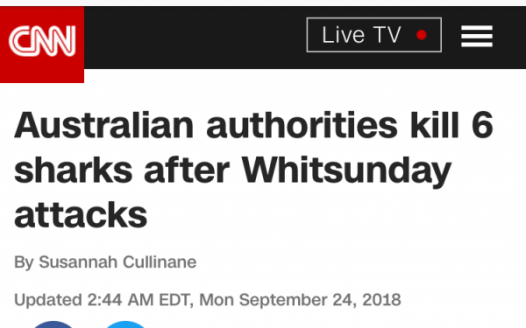 I’m sure everyone’s heard about the attack on the Whitsundays where a mother and her 12 year old child swam in A NO GO ZONE FOR SWIMMING area and were sadly attacked by a tiger shark. While the people were injured they will both make a full recovery. Since then our government has killed SIX TIGER SHARKS for the actions of ONE SHARK WHO PROBABLY DIDNT MEAN TO ATTACK HUMANS HE WAS JUST DOING WHAT SHARKS DO. This needs to stop. The ocean doesn’t belong to us, it belongs to the sea animals and sea creatures such as sharks. We have to put our foot down and do something to protect this creatures before yet again humans will be the ones responsible for the extinction of yet another species.
If you agree please sign and share this petition LETS GET THE WORD OUT AND TRY AND MAKE OUR VOICES HEARD