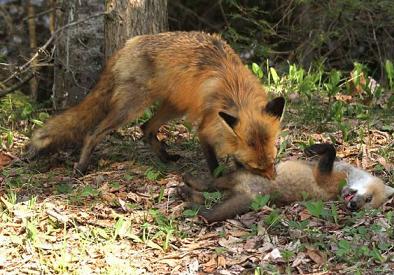 ok this is a dead fox kit a photo i took..
about 3 weeks back now, i went into the woods to try and get photo of the wild life, off in the distance i could hear people talking never thinking now i would see any wild life i went deeper into the woods and about 1 and a half later i came across some foxes a mother fox and her fox kit/baby  i sat in the bushes and watch them, i saw the mother fox trying to teach her kit how to hunt for food it was cute watching the kit jump around.
at some point the mother fox patted her little kit head and nuzzled his face like she was saying "stay here as i find us food" as the little kit was staying put and just sniffing around and i was getting so great photo of him, for about 15min..then out of nowhere i heard this loud BANG it scared me to death.and followed up by a man yelling out "OH BOY GOOD JOB YOU GOT THAT SUCKER"  as i watched on i saw two men (hunters) walk over to the little fox kit and kick it on it's belly and say "well one less one in this world" i wanted to jump out from behind the bush but the only reason i didn't was because im a 22 year old girl and trying to yell at or fight with two men who a pure guess i'd say are in their late 20s wasn't a good idea for me or any girl for that matter.
when the men walked off i looked around and started digging a whole for this now dead fox kit, when i heard a sound behind me when i turned around, i saw the mother fox had come running back when she saw her little fox kit she dropped  what look like a mouse out of her mouth, and she walked over to her kit and nuzzled his belly thinking he was playing when he didn't move the mother fox started whimpering and whimpering she then licked his face and picked up her now dead kit and walked off whimpering the whole time,it was the most heart breaking thing i've ever seen.this little kit never had a chance to life it's life...i took this photo of the mother trying to nuzzle her kit after it had died,
and it's why we need to stop fox hunting, for all the little fox kits who get shot and killed or mother and father foxes who get shot and killed and their kits are left alone scared and hungry,,how could anyone shot and kill an animal known that they could have babies or worse how could anyone shot a baby animal?
we need to stop hunting against foxes..i know other animals get shot and killed as well and that also needs to end, but for whatever reason hunters love going after foxes..just look at the UK and their "bloodsport" where hunters with their dogs hunt down a fox ripped it apart and let the fox go and chase it down again and 78% of the UK is against this but hunters still hunt and foxes are still dying..
it's mean and cruel to wild animals they are just here to live their lives like you and me why can't some people (hunters) see that the wild life is an animal home and for us to go and wreck it is very unfair.. ripping down trees stealing their homes. what if your home was ripped down and their was nothing left?  the more people we bring into this world means more trees and woods that will be taken away from wild lives, so when a fox is seen around town, a hunter is called in to kill it...why? you stole the poor thing home and this wild animal is just looking for a new home and trying to understand what happen,
my fear is the more homes building that we put up the less woods and trees their will be for wild life and the more they will be seen around homes and the more people will call in hunters to take care of it, and some day wild animals will be a thing of the past..it sounds crazy to think that but the ever growing world means people need houses and building to work at and many times means the loss of woods and homes for wild life.
where i live in  Louisiana we still have alot of wild animals running free and this petition is not about me i just want to show people look around where you live and see how many animals are losing their homes and hunters who kill animals again most times being foxes and we need to end fox hunting they don't brother us we go to then and scare them so bad or kill them and hang them on our walls sick to think people do that really.
lets put an end to fox hunting and an end to animals losing their homes