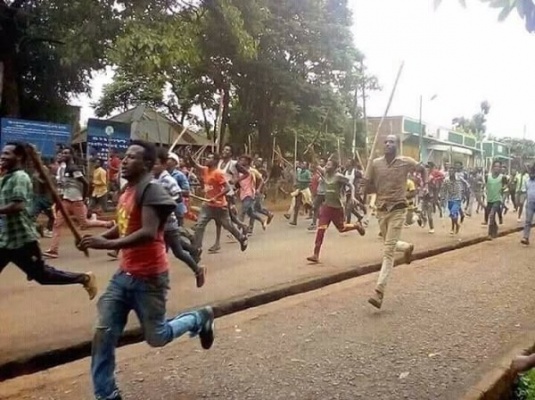 We Ethiopians and Ethiopian-Americans have been heartbroken by the recent premeditated, well organized and ethnic targeted genocidal violence that took place in Oromia Administrative Region of Ethiopia. The negligence of the Oromia Region administration, security forces, police and the country’s defence forces contributed to the barbaric Oromo mobster attacks against people of Amhara ethnic group and Amharic language speakers who had been born and lived in the region for generations. The victims have been considered as undesirable settlers and aliens, commonly called neftegna, a prerogative word used to collectively call Amharas and Amharic speakers. This violence took place right after an Oromo activist and singer, Hachalu Hundesa, was brutally and deliberately assassinated on June 29, 2020 in the suburb of Addis Ababa. The attacks against non-Oromos started using the assassination as a prtext and excuse.

This genocidal violence has been widely reported by media around the world as deliberate and calculated attacks to ethnically cleanse non-Oromo Ethiopians from Oromia Region of Ethiopia. This type of violence also took place in the 1990s under the late dictator Meles Zenawi in order to terrorize Amharas and other undesirable ethnics from Oromia Region. The only difference at this time is that the violence took place in a form of mobsters, executed by Oromo mobsters using machetes, guns and sticks while the Oromo Region security forces, police forces and the national army stationed in the region, were watching. In some cases the security forces and police forces were encouraging the attacks and were seen in looting while properties of Amharas and Amharic speakers were burning down. The police forces, security forces and the national army were watching the emboldened mobsters and claimed that they were not given orders to protect the victims. The mobsters quickly committed the genocidal attacks according to their plan of attacks that was based on targeted properties and individuals. Amharas and Amharic speakers were identified with their identity cards for the intended attacks.

The attacks as a whole left over 239 people dead and thousand wounded. Thousands of people are sheltered in churches still without police, security forces and national army protection. Ethiopian Orthodox churches have also been burned to the ground, orthodox Christianity being considered as the religion of Neftegnas, Amharas and Amharic speakers. Even Oromos who pursue Ethiopian Orthodox faith were also victimized like Amharas and Amharic language speakers. Even though the intentional, well planned and executed genocidal attacks were aimed to purify Oromia Region from Amharas and Amraric language speakers, the Ethiopian government dominated by Oromos, including the Prime Minister, downplayed and labeled the attacks as a “clash”, just to cover up its reputation and negligence to protect the victim. The Ethiopian government’s negligence to protect its citizens from attacks tells us that the government is in conflict of interest, wanting to continue Oromo dominated governance and giving room to the purification of Oromia Region through violence. Even though the government arrested over 9, 000 people allegedly involved in the violence, some security forces, government officials and police forces were released on light bails and also hundreds were fired from work, leaving us wondering how the due process for trials would take place in the kangaroo courts of Oromia Region.

We Ethiopians and Ethiopian-Americans are calling up on all friends of Ethiopia to make the government of Ethiopia accountable for genocide against Amharas and Amharic speakers. This preventable genocide took place at the knowledge of Oromia Region administrative officials, police forces, security forces and the national army. The pretension, as if these government bodies did not know the coming of attacks is sad and unconscionable beyond the magnitude of humanity. Regarding the violence the Washington Post reported as follows: https://www.washingtonpost.com/world/africa/ethiopias-week-of-unrest-sees-239-dead-3500-arrested/2020/07/08/8eb30952-c100-11ea-8908-68a2b9eae9e0_story.html

We Ethiopians and Ethiopian-Americans respectfully ask you to voice out our grief in order to make the Ethiopian government accountable for genocide that took place in the Oromia Administrative Region in order to prevent future once. As a public servant representing your constituents, we ask you to raise this issue in a relevant committee where it could be discussed and appropriate action could be taken.

We the undersigned Ethiopians and Ethiopian-Americans living in the Bay Area are so grateful for your cooperation and highly appreciate your understanding in this matter.