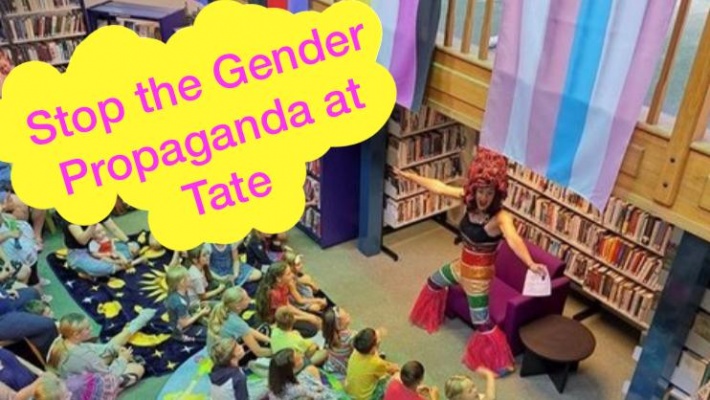 Art Not Propaganda 0 Comments
3670 signers. Almost there! Add your voice!
95%

We wrote to Tate 12 days ago to tell them about this petition and to share your comments and concerns. And what did Tate say? Absolutely nothing. Silence from them in a week when the pressure has continued to build. Grassroots feminist and gay rights organisations have joined us in asking Tate to do the right thing. A Baroness wrote to Tate’s Chair of Trustees. Even Rishi Sunak MP has been made aware and has contacted the Department for Culture Media and Sport.

Why Tate’s silence? We have our views on that…

This is a huge story. It’s bigger than a drag queen storyteller and a resource for primary teachers which tells kids not to challenge adults who are in the wrong toilets… (Yes, really!)

We have highlighted just two issues which show that there is a systemic problem here: Tate treats gender ideas as fact and those ideas now run unchecked in everything they do, including in their work for kids. We are going to shine a light on that problem.

Tate say they believe in a diversity of voices. So do we. So let’s make sure ours is heard.

Please continue to SIGN AND SHARE the petition and we will continue to work behind the scenes to build our case against Tate and to stop them from targeting kids with gender propaganda.

Tate is the UK’s largest public art gallery. It is actively and one-sidedly promoting gender ideology to children and we’re here to put pressure on them to stop in the name of children’s safety. Please read on and sign if you agree.

Aida H Dee (real name Seb Samuel) has attracted attention during his tour of British libraries this summer at which he has read his self-published stories about diversity to children.

Here’s why people have been shocked and here’s why we think this event has no place in the families programme at one of our country’s leading art institutions.

Seb Samuel has shared multiple images and comments on social media which raise serious safe-guarding red flags. A teacher would be dismissed for the same. Here are just a few:

> In a post from July 2020, he wrote that ‘love has no age’ - a phrase once used by a group who campaigned to lower the age of sexual consent so that adults could have sex with children.

> in August 2019, he posted an image of a pubescent boy and an old man commenting that gay clubs are wild because you can ‘meet both types and be told both are 23’.

> He claimed in November 2022 that puberty blockers are temporary not permanent, a dangerous view without medical basis.

Drag is a performance for adults not children which depicts women in a hyper-sexualised way. Seb Samuel is a person with extreme views about gender and Tate is giving him access to children in order to promote his own writings on the subject, paid for with public money.

Where are the safe-guarding checks? Why is this being funded with public money? How can parents trust that their kids will be safe at Tate?

Tate’s mission is to increase our enjoyment and understanding of art. How does this do either?

Like many of our public institutions, Tate has adopted gender identity theory wholesale. And for some reason, they think it’s their job to promote the theory to children.

This Tate resource for schools and teachers is chock-full of safe-guarding issues.. Titled I WANT TO SHOW YOU A BODY, the 46-page document is for primary and secondary school children and “aims to encourage gender emancipation within schools”.

“Don’t tell people they’re in the wrong toilets or changing rooms, they probably know more about their own gender than you do.”

“Remember, trans women are women and should have access to women’s spaces and facilities.”

“It's a good idea to avoid arbitrary gendered divisions such as splitting the girls from the boys in PE or Relationship and Sex Education classes.”

The resource is encouraging teachers to break the law.

It promotes an affirmative approach to gender in children which is entirely out of step with current thinking. The interim report from the Cass Review robustly challenges the orthodoxy of affirmative care. How and why do Tate think they know better?

Tate partnered with trans-activists Gendered Intelligence to create the resource, presumably paying them for their consultancy. At a time when debates around sex and gender are live in our courts of law, in the media and in conversations around the breakfast table, Tate has decided where it stands. Where is the balanced approach here? Where is the analysis? Why has Tate made up its mind already on the defining debate of our era?

It is a critical child safe-guarding issue that this resource is removed now.

Our last example shows you that gender ideology is rife in Tate’s programme for children. Here are their workshops for schools this spring:

The artists involved in the programme all share their pronouns. Two of the five teaching artists state that their creative practice explores their transgender experience - how will this translate into the schools workshops? Why does Tate assume that parents are happy for gender theory to be promoted to their kids in this way?

We say it’s long overdue that Tate jumps off the gender bandwagon and starts to think for itself on this subject.

Tate is accountable to us, the public, via Parliament for the services it provides.

In Tate’s own words: “We want to welcome audiences that better reflect our nation and attract a diverse international public.”

So listen up Tate: we are your public and we are here to tell you that inclusive means everybody. That includes the very many people in this country who don’t agree that gender ideology is the law and who don’t agree that children should be exposed to its thinking uncritically. You need to read The Cass Review, you need to remember your duty to the safe-guarding of children and you need to get back to your mission: art.