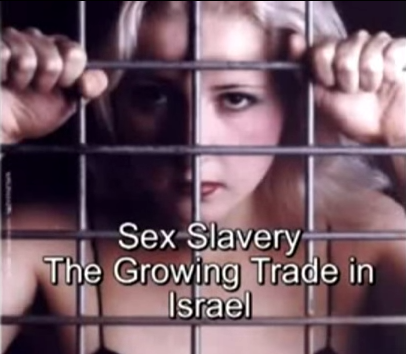 A little-known fact is that the state of Israel is the world capital of the sex slavery business. There are at least 500,000 mostly white European women currently being held prisoner in Israel and forced into prostitution. Most of these women were lured into this with false promises of good-paying jobs being maids, gardeners, and the like. When they travel to Israel, their passports are seized for "safekeeping" and they are forcibly moved to a brothel. They are then forced into prostitution by either withholding their food, and/or subjecting them to repeated beatings and rape until they comply. Often these women are held captive for years, unable to escape from armed guards that are around them all the time. Those few who DO manage to escape are often caught by Israeli police and returned to their original brothel, where they are severely beaten for running away. The criminal thugs running these operations receive on average $200,000 per enslaved woman per year, tax-free.

Watch this video for more information: http://youtu.be/k-3Fqa7Ohzk
This petition is a call for the US Congress to withhold ALL foreign aid to the state of Israel, until all evidence of sex slavery in Israel has been eradicated. Furthermore, the state of Israel should be required to arrest the perpetrators of these heinous crimes, and they should be forced to compensate the victims of these crimes, to the tune of at least $100,000 per year that they were held captive. This should amount to approximately $50 billion per year for the 500,000 women that are currently there.