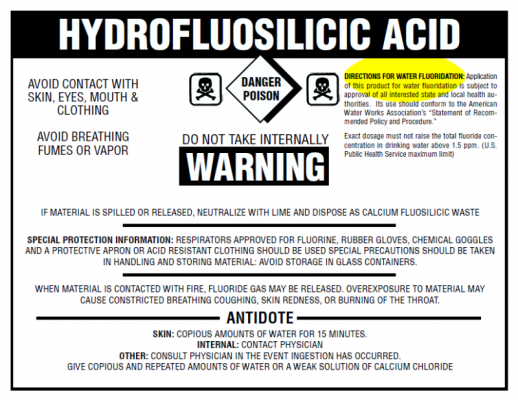 I am an Albuquerque resident and it is my hope that this petition finds all the residents of the Albuquerque well and is written by someone who cares deeply about each and everyone of you, your family members health and well being. I believe that if you have loved ones (kids, parents, grand-kids, and anyone special, even yourself) that you take the time to look at what I will present to you below as one of the most dangerous health crisis in our times. I hope to present some documented proof on the dangers of fluoride and how putting it in our water is not only dangerous but highly toxic to each and everyone of you and your loved ones.

Water Authority Board (WAB) is voting on August 23, 2017, to continue fluoridation at a cost of $270K annual tax payers money that will put a toxin in our water supply. I urge you to sign the petition and spread the word to everyone and encourage the WAB to vote to use the $270k and use it to filter our the naturally occurring fluoride so we can have clean pure water and not medicated, toxic water that has no way of being regulated by people, children, or older adults.
http://www.abcwua.org/Latest_News.aspx?8d915011d39...

The following documentary was created by some individuals who wanted to get the word out on how highly dangerous fluoride is and the history behind why its in our water supply in the first place.

In the 1920’s, aluminum manufacturing, due largely to the flourishing canning industry, was booming. But it was also a big producer of toxic waste, namely sodium fluoride. The biggest dilemma was the cost to safely dispose of this hazardous waste, since it was extremely expensive. A company in Pittsburgh, ALCOA, led by their founder and major stockholder, Andrew Mellon, had some “revolutionary” ideas of how to cut the costs of disposing of sodium fluoride.

Under EPA regulations, sodium fluoride was previously required to be disposed of in a landfill for toxic waste. However, Mellon got himself appointed Secretary of the Treasury which at that time was in charge of the US Public Health Services (PHS), and to make a long story short, without any studies, Mellon found a market for his toxic waste (and the toxic waste of the soon to emerge nuclear industry)—the municipal water supplies of the USA.

Under Mellon’s supervision, ALCOA-funded scientist Gerald J. Cox publicly declared that fluoride was good for your teeth, and in 1939, he proposed that the USA should fluoridate its water reservoirs. In essence, sodium fluoride was given the “green light”… not by a doctor, not by a dentist, but by a scientist who was working for the largest producer of fluoride in the entire country. I’m not joking, that’s how it all started!

The following page lists the 9 dangers of fluoride with 28 scientific references/studies done on the toxic effect on our health at the bottom of the URL link provided.
https://www.globalhealingcenter.com/natural-health/9-shocking-dangers-of-fluoride/

This discusses why it would be detrimental to everyone's health to start putting fluoride back into the water supply in Albuquerque. There are 8 scientific studies at the end of the document stating the harmful effects of fluoride.
https://www.globalhealingcenter.com/natural-health/5-good-reasons-you-should-avoid-fluoridated-water/

Here is a US District court lawsuit filed from the Fluoride Action Network (FAN), Food and Water Watch and coalition of environmental and public health groups against the EPA for fluoridation of the water supply in California currently taking place as of 4/18/17. In this lawsuit it states many reason as to why we should not be putting fluoride in the drinking water supply.

U.S. government has admitted that the public has been “overdosed” on this health-damaging chemical, only recently lowering the recommended level of fluoride in water from 0.7 to 1.2 milligrams per liter (mg/L) of water to 0.7 mg/L, to prevent signs of fluoride overexposure. Translation: cover up of the US Department of Health and Human Services (HHS), and protect them from the very type of lawsuits which Fluoride Action Network (FAN) is now putting forth.

Dental fluorosis is a defect of tooth enamel caused by too much fluoride intake during the first 8 years of life. Although fluorosis can be cosmetically treated, the damage to the enamel is permanent. Common causes of fluorosis include: fluoridated drinking water (particularly during infancy), ingestion of fluoride toothpaste, use of fluoride tablets, and consumption of processed foods made with fluoridated water.

At present, 97% of the western European population drinks non-fluoridated water. This includes: Austria, Belgium, Denmark, Finland, France, Germany, Greece, Iceland, Italy, Luxembourg, Netherlands, Northern Ireland, Norway, Portugal, Scotland, Sweden, Switzerland, and approximately 90% of both the United Kingdom and Spain. Although some of these countries fluoridate their salt, the majority do not. (The only western European countries that allow salt fluoridation are Austria, France, Germany, Spain, and Switzerland.)

Despite foregoing “one of the top ten public health achievements of the twentieth century,” tooth decay rates have declined in Europe as precipitously over the past 50 years as they have in the United States. This raises serious questions about the CDC’s assertion that the decline of tooth decay in the United States since the 1950s is largely attributable to the advent of water fluoridation.

Here is an article showing how fluoride has been shown in 50 scientific studies conducted by Harvard School of Health children's IQ are lowered due to fluoride.

Impact of Fluoride on Neurological Development in Children
http://fluoridealert.org/articles/hsph_2012/

US Government Admits: Americans Have Been Overdosed on Fluoride For Decades (http://realfarmacy.com/government-admits-fluoride/)

studies to back up the claims. Please refer to these sites for more

In an era where we have access to vast amount of information at the palm of our hands I beg you to take some time to watch the movie provided and do some research on the subject. There is a mountain of evidence showing fluoride and fluoridation of water is detrimental to a humans health despite claims its good for preventing cavities. There are other ways of preventing cavities than putting a known toxic chemical in the water.

I will end this by saying thank you for at least taking the time to read this petition and for allowing me to provide feedback on such an important topic.

Each signature will make a difference!

Here are a few quotes related to the subject.

"I am appalled at the prospect of using water as a vehicle for drugs. Fluoride is a corrosive poison that will produce serious damaging effects on a long term basis. Any attempt to use water this way is deplorable." —Dr. Charles G. Heyd (past President of the American Medical Association AMA)

I leave you with this quote from EPA scientist, Dr. Robert Carton: "Fluoridation is the greatest case of scientific fraud in this century, if not of all time."