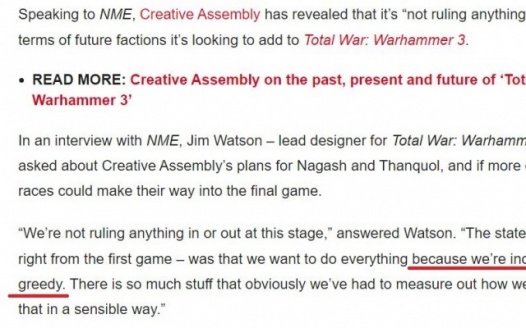 Many Total War players including myself, are tired of the Creative Assembly’s behavior when it comes to game releases. Total War: Rome II's disastrous release has come a long way since 2013 and 9 year later (now in 2022), the only thing that needs fixing is path finding, and people disconnecting from multiplayer lobbies because their multiplayer chat is dysfunctional and bugged, without a solution. Moreover, we are sick and tired of the amount of DLC's (Downloadable content). At this point it’s a blatant insult, not only is the Creative Assembly selling faction DLCs, but they are also selling Lord packs for Warhammer! This is the equivalent of the Creative Assembly selling Hannibal and Caesar as a DLC for Total War: Rome ii! This must come to end. Read the following passage from an article I found on NME gaming news:

We’re not ruling anything in or out at this stage,” answered Watson. “The stated intention – right from the first game – was that we want to do everything because we’re incredibly greedy. There is so much stuff that obviously we’ve had to measure out how we can deliver that in a sensible way.” Jim Watson-Lead Designer-Total War: Warhammer 3.

I am not buying any creative assembly software again until they prove they can make great content like they used to in the past, such as Medieval 2: Total War.

Stop selling so many DLCs.

Thank you for reading and please share this with other total war players!