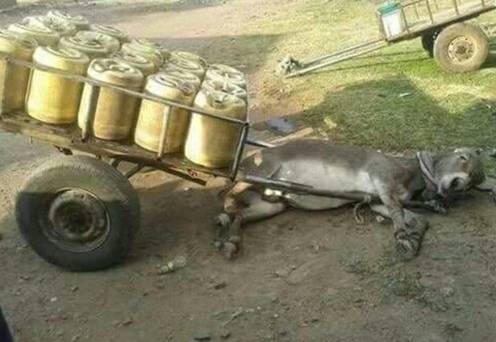 Limuru is literally known as the land of donkeys, reason being that

these very important but largely unappreciated animals are a crucial

means of transportation virtually everywhere. In Limuru as well as in

the neighbouring sub counties, you’ll find a donkey in every homestead.
Yet these animals are more often than not mistreated and spited by the very man who uses them for his transportation needs.
In

end of man’s greed, selfishness and ingratitude, we’re awestruck by the

suffering and vulnerability of these animals.
Most of the donkeys

were full of injuries, scars and suffered bacteria and fungi infections

reveal. There were even donkeys that had their genitals mutilated and

infected to a point of impotence.
There were those that had deep

wounds as a result of merciless whipping and lack of protective

mechanisms such as head gear and back clothing. Others had their body

parts mutilated ostensibly for identification purposes.
There were

and tired. One donkey died as soon as its load was taken off its back.
Most

donkeys in this locality are infested with pests such as worms, ticks

spite of them being expectant.
In these areas, donkeys are popular

with community events such as political rallies, campaigns and weddings.

But as one picture depicting a political rally reveals, a whole village

is more than being exploited and misused.
The donkeys are again

poorly fed to a point of being skin-and-bone. They leaf through

hazardous grounds that are can make them contract dangerous germs and

diseases. We found some donkeys literally scavenging in a hospital yard

that is so full of health hazardous such as used medical equipment. Some

as a result of lack of enough diet. Some donkey owners wouldn’t even

drinking water.
Yet there were those that suffered spinal problems

and yet medical attention seemed not forthcoming at least in the

foreseeable future.
Donkeys’ young ones as one picture shows are

separated from their mothers prematurely and are again committed to work

before they mature fully for such ordeals.
Donkeys in this locality

are also poorly housed. After a long day doing back breaking work, they

retire to squalor and squalid conditions at night, places that smack of

germs and diseases due to infestations with the same.

nutshell, folks here have not been at the very least, been grateful and

caring as much as they ought to be of these key animals; creatures that

should be man’s best treated and loved friend.
This means that more

appreciative care and protection should be given to these animals for

them to continue serving man well as they have always done for ages.

After all, these animals are made of flesh and blood just like we the

human beings who are mistreating them badly. They also do have feelings

just like we and we should at the very least be sympathetic to them. We

have to get rid of barbaric exploitation of these creatures.
Yet

above all, we need to create and enhance awareness to donkey owners on

them better and more effectively.