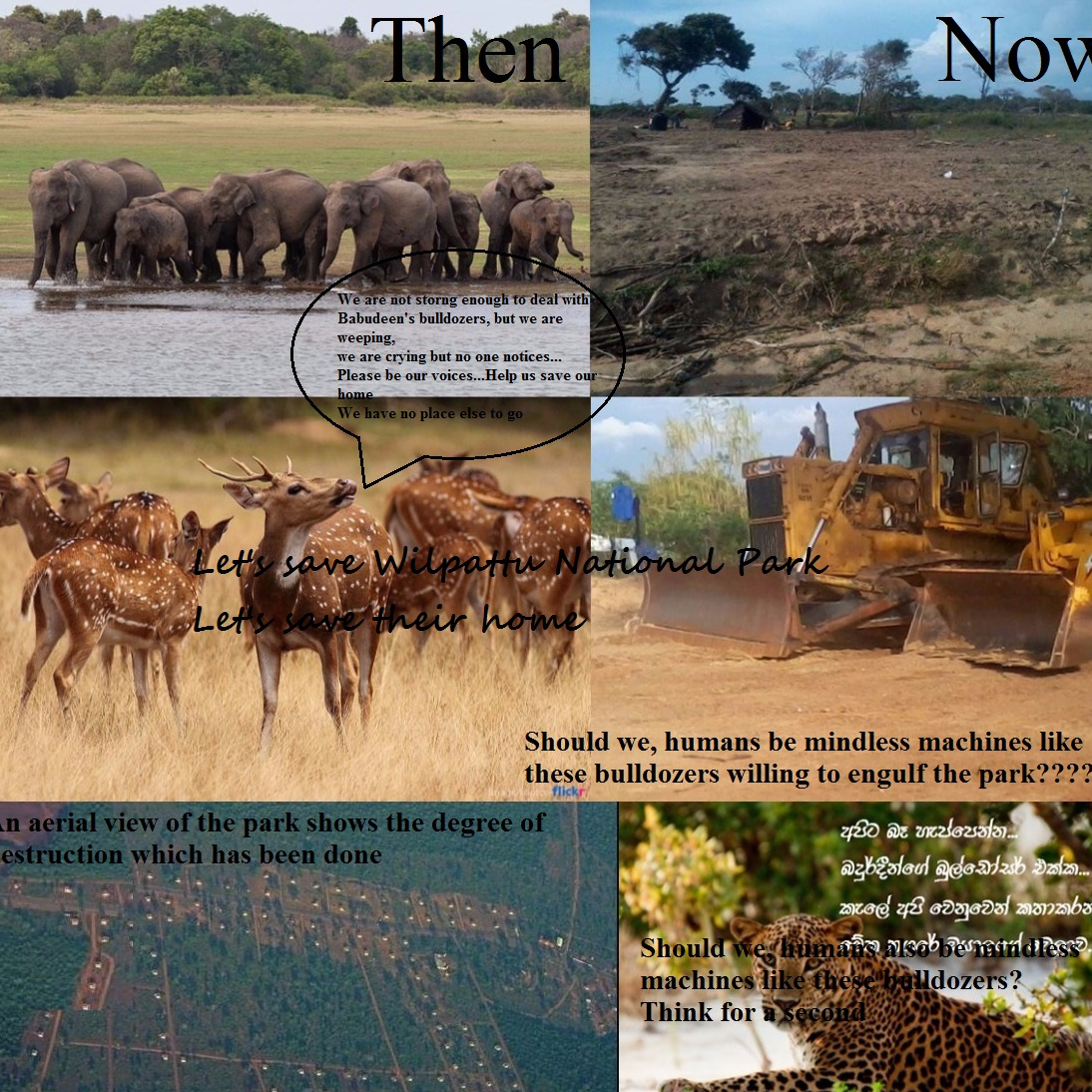 Stop destroying the Wilpattu National Park and save the animals

Wilpattu National Park is the largest Naional Park in Srilanka which was declared a National Park in 1938. It is 131 693 hectares in extend and home to a variety of species of flora and fauna. The unique feature of Wipattu National Park is the presence of "Willus" small natural lakes which are depressions in the top soil layer which collect rain water in the rainy season. These "Willus" are scattered all over the park and have become a major tourist attraction as well a life saving treasure trove for all the animals in the dry seasons

Talking about flora and fauna, the park is located in north western part of sri lanks bodering the districts Puttalam and Mannar. Many species of plants native to semi arid, arid and wetlands are seen. Talking about animals, there are 31 species of mammals and endangered species like elephants, leopards, sloth bears are a common site. It is a Safari paradise.

During the 30 year Civil war in srilanka, this park was closed but since the end of the war, the attraction to this park is increasing exponentially over time and thousands of tourists visit this park everday. Wilpattu has become a major tourist attraction. The full credit of that goes to non other than the flora and fauna which inhabit the park. but now sadly the fate of those are in danger...Why?

Minister of Rehabilitation Rishad Badurdheen is conducting some rehabilitiong projects in the park area. He is literally destroying areas of the park to distribute land among muslims. His actions are totally against the law and no one is taking actions because he does this in a hidden manner, but now everthing is expose.. Badurdeen may fool the newly appointed government officials, but not Google Maps... See how it shows the destruction of the park area by this man. Rehabilition is a must for a country, but if it is done destroying other's habitats, how come it be a re habilitation? It is the exact opposite of re habilitation.

Why should you sign this petition? You should sign this petition because those innocent animals do not have a way to convey their feelings to the responsible parties. They cannot stand up to the bulldozers of Rishad Badurdheen. Therefore we should become their voice.... Let's stop this mad man from destroying the beautiful Wilpattu National Park to accomplish his peevish racist ambitions.