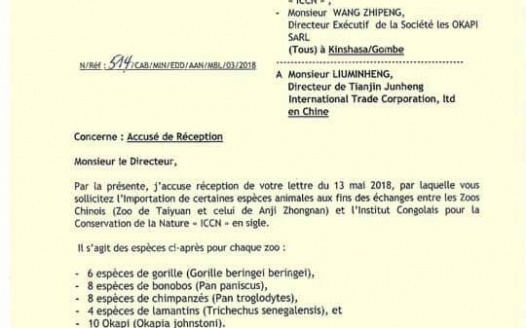 Stop Congolese government from exporting our endemic wildlife to china

Multiple species of highly protected/endangered wildlife will be shipped to China soon from the DR Congo. These include six gorillas (Gorilla beringei bergingei), eight pygmy chimpanzees ( Bonobos), eight chimpanzees, four manatees, and ten Okapis. These species, some of which are endemic to the DRC, will end up in Taiyuan and Anji Zhongnan Zoos in China.

Chinese authorities made this request as part of the bilateral agreement between the ICCN (Institutions Congolais pour la conservation de la nature) and Chinese zoos.

Following the request by Mr. Liu Min Heng, executive director of Tianjin Junheng International Trade Corporation to import these animals to the Minister of Environment, nature conservation and Sustainable Development, Mr. Amy Ambatobe Nyongolo announced the arrival in China, of a team of Congolese experts with the mission to ensure good reception and best conservation of these different species in these zoos.

The agreement stipulates that any offspring of these animals should be introduced into the wild, in their natural habitat in the DRC, something which is unlikely due to many challenges, mainly the constant Congolese state's lack of resources to carry out such exercises

Even though the process is said to be legal and above board, nobody knows what the government of the DRC got in return for the trade of these precious animals and national heritage.

The bilateral relationship between China and the DRC seems to be a one way street where China dictates, thus getting the lion's share.

No Chinese endemic species are here in the DRC nor experts from China are involved in any conservation within the DRC yet they can make requests for anything they want from our fauna and flora and get it.

Let's emphasize that recently a group of Chinese individuals are said to have bought a forest the size of France in the Congo basin region, home to the majestic Salonga national park.

Chainsaw noises can be heard from miles away already, eating away the forest which has a very important biodiversity and a habitat for many endemic animal and vegetal species.

The biggest worry is what happens to the many villages found in the area. Are they part of the sale too or will they be kicked out of their respective homes?