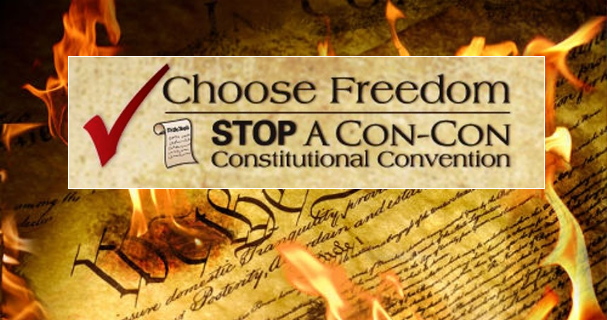 This is a Petitition to the NH State Legislature urging them to support HCR 1 — a resolution which rescinds New Hampshire’s call for an Article V Convention.


Why we oppose an Article V Convention:

- An Article V Convention cannot be limited to a single issue or topic.

- Delegates to an Article V Convention may change any previously agreed upon rules.

- Any laws either at the state level or federal level would be unenforceable once a convention is convened.

- Under Article V, Congress can choose the mode of ratification and New Hampshire legislators may never get a chance to vote on any of the proposed amendments.

- Adding new amendments to the Constitution is no way to rein in a runaway federal government.

- Amendments proposed by a convention, if passed, may force changed in the NH Constitution.


"Overturning Citizens United" would mean amending the 1st Amendment. There's simply no other way to do it, since the Supreme Court's decision was based on the 1st Amendment. This is what has many people justifiably worried. The most likely amendment to pass would be an amendment overturning Citizens United, as it has wide support among both the left and right, unlike a balanced budget amendment.