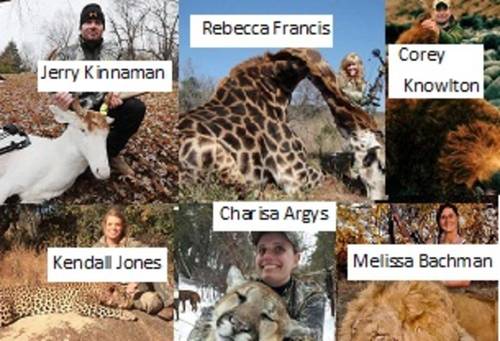 The outrage of the killing of Cecil the lion has brought to light the hunting of our majestic creatures. Cecil was well loved and now his legacy is to let us know that this practice is happening more often than we would like to think. Although he was lured out of his area, "canned hunting" is something that is happening RIGHT NOW. Here's some information on this:

"Canned hunting is a type of hunting in which animals are placed in a confined area, then followed and gunned down by hunters. Also called trophy hunting, canned hunts are popular in South Africa, where lions are often bred for this purpose alone. Hunters come to these "canned" areas and pay large fees to hunt the lions.

With canned hunting, the animal is sure to die since it's being held in an enclosed area with no chance for escape. It's a completely unfair and brutal practice, and only exists for the entertainment of morally challenged hunters."

Walter Palmer is the most hated man right now, but as the picture shows, there are many, many more like him that are trophy killers. Google them and you'll see why they too have been sent death threats.