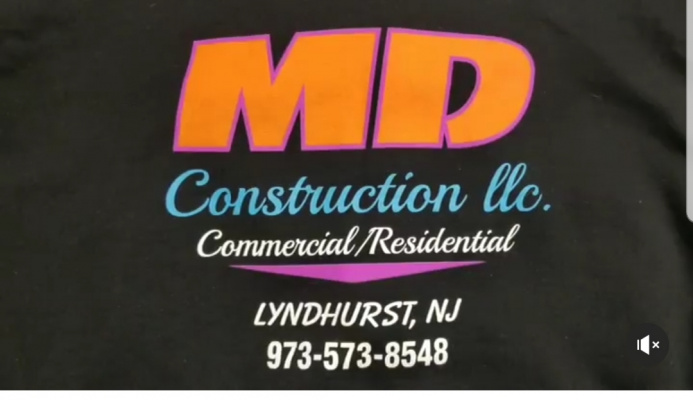 On October 2, 2017 a young man crashed through my house destroying my home. I interviewed contractors for masonry work and I came across MD Construction after knowing the owner Massimo Iuele whom I went to school with we sat down & I hired him to do my home. There were 3 contracts that he had given to me for the work that needed to be done. The 1st contract was for $ 22,5000 which covered the the excavation & masonry for the addition on my home (paid in full), 2nd contract was for $41,500 which covered the masonry work for the original structure of the house & excavation (paid in full), 3rd contract was for $34,500 which was for the framing (which I gave only $7,000 towards work) all 3 contracts totaling $71,000. I asked MD Construction numerous times for license & insurance information before starting the job & during the job to which I never received any documents. After numerous problems on the job caused by MD Construction I decided to contact the Division of Community Affairs because MD Construction would not provide me with license & insurance verification. The Division of Community Affairs explained to me that as of April 1st, 2019 his license ( #13VH08190300) was expired and his insurance policy # 1842142 had been lapse as of December 29,2018. MD Construction kept repeatedly asking me for more money telling me that he could not pay his employees, needed to fix his machine &had no registration on his work trucks, finding out he had spent the money of the $71,000 that I had given for the 3 estimates, he refused to provide me with any receipts or material costs. I therefore explained to him without a valid license & insurance coverage that he should not be working on my job. I have had numerous confrontations with him explaining that he is in breech of contract. I told him he as the option to return my money ($71,000) or he can renew his license & insurance & finish the job & scope of work that I paid $71,000 for that to which 2 of contracts are paid in full & has an additional $7,000 towards the 3rd contract which I will attach showing my signature & MD Construction signature on every dollar given by me to MD Construction. Right now there is only about 25% of the foundation complete & MD Construction has paid for nothing besides 2/3 works, block (partial) , sand & rock estimated to be about $20,000 on the high end. He is now trying to change prices, raise praises & asking me to sign other contracts with him, again this is a lot of money & I didn't expect any of this I just want my home to be rebuilt I have been out of my home for 1.5 year, refuses to give me money back & is a constant fight with him. The whole foundation of the house after speaking with other contractors for 1800 sq ft home should be no more than $30-40,000, he has $71,000 and is asking for $18,000 more. We will provide pictures of the scope of work that has been completed thus far & material that has been ordered. I would just like this to be resolved either my $71,000 back or the foundation work finished. He has done this to multiple people, while drinking and using drugs we need to stop this from happening something such as a state licensing and drug testing of contractors. Other businesses have to be state licensed and go through extensive drug testing dealing with money like this. Contractors on the other hand get away with it, get judgments put on them and never pay or file bankruptcy and take the money and run. This needs to stop and I know there are many people out there who have experienced this and have had hard earned money take or been set back due to people like this who suffer no repercussion or jail time either. Sign this petition this way we can make it that there is now repercussions for Contractors, they need to be State Licensed and that if they take money and don't pay that just like anyone of us will do jail time. This is a flawed system and if we don't work together this will keep happening. Remember Criminals make the legal system money and make the legal system go round. The Fvaor is to them.