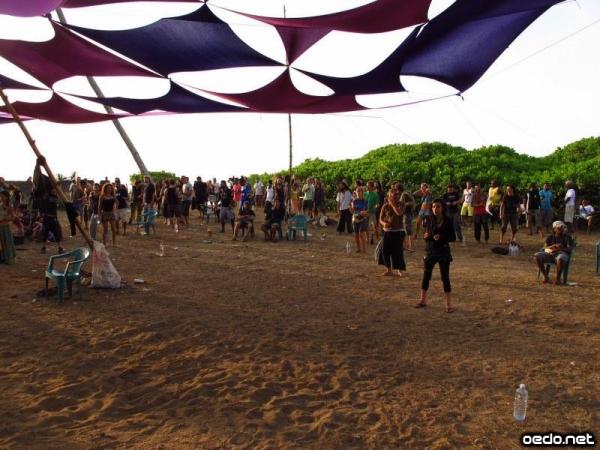 The Federation of Environmental Organizations (FEO) of Sri Lanka announced yesterday its knowledge of a large scale international rave festival that happens along a stretch of beach within the Rekawa Marine Turtle Sanctuary and calls on the relevant authorities in charge to take immediate action to preserve the country’s marine biology and natural resources. The Atman Festival is a 5-day psychedelic rave that has been planned from the 20th to the 25th of January, which coincides with the start of the turtle-nesting season. The highly destructive event deliberately misleads by false marketing as an “eco-sustainable festival”. Already in its second consecutive year, the event violates Sri Lanka’s environmental laws and causes a massive disturbance to 5 of the 7 globally threatened turtle species that frequent the beach to lay eggs.

Declared as Sri Lanka’s first marine turtle sanctuary by the Department of Wildlife Conservation and the Coast Conservation Department, it is estimated that an average of 17 turtles come ashore daily to lay eggs, during the peak months between January and July. The increased human presence, pollution brought about by the festival and light pollution all indirectly affect the animals, potentially leading to turtle deaths and a reduction of numbers frequenting the beach. “We are not against people having a good time and enjoying the beaches of this island. We are advocating that raves and parties like this should be moved away from marine turtle sanctuaries and protected areas, held elsewhere in locations where disturbances caused to the environment are minimized” said the Chairman of FEO Mr. Rukshan Jayewardene. The FEO calls on the relevant authorities to act on this matter swiftly and ban this music festival from happening within the Rekawa Marine Turtle Sanctuary. Thereby not allowing the marine resources of our country to be jeopardized.