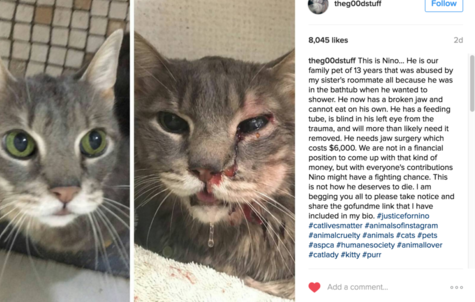 Hey everyone, my name is Silver and I'm tumblr user unshrink. Link to my post on Tumblr: here (I want to clarify that I am not connected to Melanie in any way, I am in fact a very concerned stranger hoping to create awareness with Nino's story. The story really broke my heart and I am hoping you guys can donate or share his story/this petition. We need to make a change.)

Recently I came across Melanie Oliva's instagram page with a post about how her cat, Nino, had been abused by her sister's roommate and is now suffering from a broken jaw and blindness to his left eye because of the trauma and will most likely need surgery to fix the jaw and the eye.

My post here isn't just to tell you about his story or just to help raise funds (In fact they've surpassed their goal of $6000!) . My petition is in hope that justice would be served and that the man who abused Nino be punished by the law accordingly and not just be let off with a fine or something like that as I've seen some cases like that. PLEASE, THE GOVERNMENT NEEDS TO DO SOMETHING. I'm so sick of reading reports of animal abuses and seeing pictures of what the animal was like before and after the abuse and it honestly breaks my heart. We as humans are given the animal's trust to care for them, why would sick and perverted people like the man in Nino's story do something so horrible? We need to put stop to ALL TYPES of animal abuse. We have the ability to do something, we have the platform to share and we have the power to put a stop to such sick acts. We need to do something. Some of you may tell me, "Oh you're just sitting behind the screen typing this out and not doing anything either." But by starting this petition and with the help of you guys, we can call for some action from the government not just in my country but in yours too, we can call for tighter, harsher sentences, we can start a change.

Though this may not help much, we need to use Nino's story to create awareness about people like his abuser. We live in a world where society is so cruel, in fact, the whole world is so cruel, but animals are what makes this place a little less harsh, they provide us with love that no ordinary human can give even match to. Their entire lives are in our hands and we have the responsibility to make sure they are okay, whether or not they are yours or someone else's. They've done nothing but provide us with love and attention, what did they ever do to deserve this? They don't and we need to protect them from monsters who do sick and cruel acts on them. We need to use the voice we have as humans to speak up for animals who don't have the voice to do so.