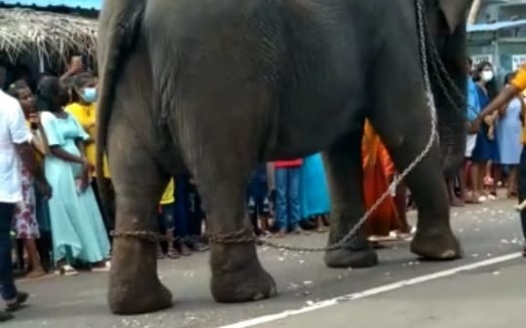 358 people have signed this petition. Add your name now!

The female elephant that has been gifted by Pinnawala Elephant Orphanage to Dewinuwara Vishnu Dewalaya in Dondra.

(Yes the same temple where male elephant Kalana was neglected and abused and confiscated by the Government).

Her life is in danger due to several reasons. Her mahout of 12 years has been sacked by the newly appointed Basnayaka Nilame (lay custodian) Thilina Madusanka Abeyratne since a Monk named Palatuwawe Gunanda himi wanted to appoint a mahout named Ranga whose friends with him.

Ranga and his family are infamous for being cruel and tough mahouts. They are known as elephant killers.

Ranga is already taking care of illegal elephant Mihin Raja registered under Mahinda Rajapaksas personal body guard and acts as a head mahout to both Lasanda and Mihin Raja now and he has so far appointed 5 sub mahouts to stay with Lasanda. So Lasanda has had 6 mahouts from March to date.

Its common knowledge that each time a mahout changes the mahout would torture and terrorise the elephant much more than usual to make sure the elephant obeys his commands.

Our solution is for her old mahout Danushka to be reinstated simply because he is not as bad as what happening to this gentle girl now.

Lasanda also had a eye condition which was treated by Zoo Department in 2020 but it has now worsened and she needs to be warded at Dehiwala Zoo again for that treatment. She is also being used to give rides which didnt happen earlier and exploited in all possible ways to earn