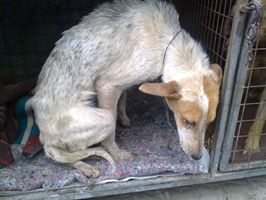 1875 people have signed this petition. Add your name now!

On the 20th of October 2011 the dog named Warrior was pulled from a 1.5 meters under the ground at Luhlaza Secondary School Khayelitsha. The school’s kitchen cleaner called the incident in to the Mdzananda Animal Clinic in Khayelitsha who immediately rushed to the school to save the dog.The principal, Manono Makhaphela, had allegedly ordered two janitors to “get rid” of the stray dog as it was regarded as a nuisance.

After many months of court proceedings and postponements the final judgement took place on Monday 24th June. The principal was found guilty. He was charged with a R6000 fine but only had to pay R3000. The other half was suspended for a period of 5 years under the condition than an animal protection awareness program was implemented at the school no later than 18 July 2013.

Today, over a year later, NO animal protection program has been implemented.The Mdzananda Animal Clinic has reported the case back toNational Prosecuting Authority.They said that they will instruct the prosecutor toissue a warrant for his arrest and that they would bring an application before court that the suspended sentence be put into effect.To date we have not heard anything

The Mdzananda Animal Clinic would like to hand petition signatures to the judge and the high court to enforce a harsher punishment or for them to enforce and ensure that the principal serves his initial punishment fully.

Please sign the petition to give justice to Warrior dog (now named Lily).