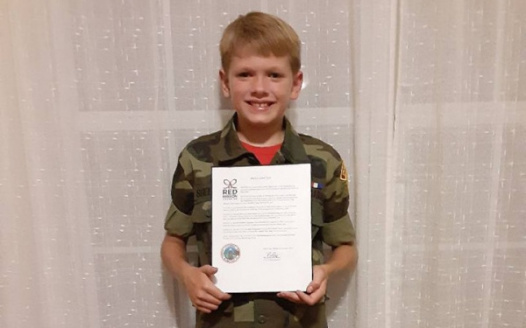 Red Ribbons are a symbol for the awareness and prevention of drug abuse and drunk driving.

On Feb. 7, 1985, the 37-year-old Camarena left his office to meet his wife for lunch. Five men appeared at the agent's side and shoved him in a car. One month later, Camarena's body was found. He had been tortured to death.

In honor of Camarena's memory and his battle against illegal drugs, friends and neighbors began to wear red badges of satin. Parents, sick of the destruction of alcohol and other drugs, had begun forming coalitions. Some of these new coalitions took Camarena as their model and embraced his belief that one person can make a difference. These coalitions also adopted the symbol of Camarena's memory, the red ribbon.

Andrew is a Young Marine with the Parris Island Unit and part of being a Young Marine they receive credit hours towards their Drug Demand Reduction training. Recently met a former DEA who worked along side of Kiki Camarena.

Since this is Red Ribbon week, the Young Marines are asking for your signatures to show your support and in showing you will remain drug free!

Please join us and Andrew and add your signature to our list and support him as he earns credit towards his Drug Demand Reduction (DDR) hours. Below is a photo of Private Sheehan receiving a plaque from the City of Bloomingdale to show they will remain drug free.