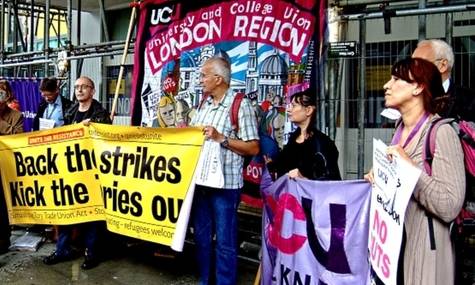 An abndged version of this letter appears in the Guardian newspaper on Saturday 6 August 2016.

We the undersigned, commit ourselves to a campaign of solidarity and support for the UCU branch at London Metropolitan University (LMU), in their battle for the future of the university.

LMU Management are attempting to radically restructure the university, not on educational principles, but to run the most profitable courses as cheaply as possible. Students and staff are paying the price. Since its formation by merger of University of North London and London Guildhall University, London Metropolitan has been run into the ground, with student numbers cut from over 30,000, at its formation in 2002, to a projected 10,000, departments and courses slashed, serial rounds of job losses, and the campus reduced from three sites to one.

The fight at London Met is coming to a head in the summer of 2016. The timing is no accident.

The Higher Education and Research Bill in front of Parliament seeks to intensify competition in the Higher Education sector. It will permit private companies to enter the market for students and the tuition fee income they bring. This income is now uncapped by student numbers and (as one of the last acts of this Parliament) permitted to rise with inflation. Unlike a proper university, which is supposed to have a broad range of courses, these ‘alternative providers’ will be permitted to cherry-pick courses according to profitability.

LMU management is emulating these companies, possibly as a prelude to formal privatisation. Across the road from the main LMU Tower Building, new student accommodation is going up. The newly-appointed chair of the Board of Governors was until recently a senior Pearson executive. It is not hard to read the signs.

Two facts stand out about London Met: it has a higher UK BME student intake than the entire Russell Group of Universities put together, and its budget and staffing have been cut annually as a result of the ravages of existing market competition. LMU demonstrates empirically that the Government’s Higher Education Bill will reduce social mobility, not increase it. Indeed, market competition has already led to the closure of a wide range of highly-regarded research units and courses taken by working-class and black students. Greater deregulation simply allows managers to cut further.

London Met is a test case and a key battleground for the soul of Higher Education. Having axed courses, the management is engaged in a full-scale assault on the conditions of employment of staff. For the next academic session, a third of the workforce (395 staff) have been told that they will be made redundant. Most jobs are not disappearing, however. Instead they will be filled by staff on Sports Direct-style zero-hour contracts.

Finally, in order to break the local trade union opposition to this return to Victorian working conditions, the management of LMU has sacked the Chair and Secretary of the UCU branch, Mark Campbell and David Hardman. Despite huge pressure on them personally, these colleagues have pledged to continue their fight to defend jobs and to demand their reinstatement. We the undersigned call on the entire trade union movement to stand with Mark and David and the local UCU branch.

The LMU UCU branch has voted to be consulted on strike action in defence of jobs and of their representatives. If LMU management does not back down, the branch is consulting its members to request UCU to call on academic colleagues, world-wide, to boycott London Metropolitan University. We pledge our support for such strike action and for any academic boycott, should it prove necessary. We call on all others who care about Higher Education to do likewise.