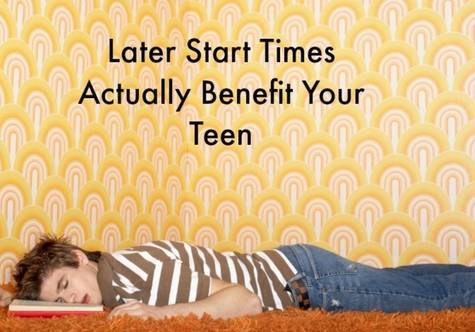 The National Sleep Foundation recommends that adolescents get between 8.5 to 9.5 hours of sleep every night, but due to early school start times and a switch in the circadian rhythm of teens, many high schoolers are not getting this amount of sleep. In the book Sleep: What Every Parent Needs to Know from the American Academy of Pediatrics (AAP), when children reach puberty, they experience a shift in their circadian rhythm which causes them to not feel tired until around 11 p.m. which is why teens tend to go to bed late and sleep in. As high schoolers are going to bed around 11 p.m. and waking up around 6 a.m. for school, they cannot obtain the recommended amount of sleep which leads to health and safety risks. Inadequate sleep leads to major problems such as the development of mental illnesses, increased drowsy driving and car accidents, and a decline in attendance and grades. High schools should shift start times to at least 8:30 as recommended by many organizations such as the AAP, U.S. Center for Disease Control and Prevention (CDC), American Medical Association, and the National Sleep Foundation.

Drowsy driving is a serious problem for high schoolers as this increases the chance of a car accident. According to Kyla L. Wahlstrom in "Later Start Time for Teens Improves Grades, Mood, and Safety," car accidents are the leading cause of death in teens with 2,700 dying each year. High Schoolers are usually new drivers and when they are not attentive enough in the morning due to lack of sleep, they create a dangerous situation for not only themselves, but everyone else on the road.

Many studies have also found a link between sleeping problems and mental illnesses such as Brandy M. Roane and Daniel J. Taylor from the Department of Psychology at the University of North Texas who found teens with insomnia were more likely to abuse drugs, have depressive symptoms, and suicidal thoughts. In the article "Sleep Problems and Their Relation to Cognitive Factors, Anxiety, and Depressive Symptoms in Children and Adolescents," Candice A. Alfano et al echoes Roane and Taylor as they found teens with sleeping problems were more likely to develop depression or anxiety.

Switching high school start times could correct all these issues, or at least create a healthier and safer environment for high school students. Schools that have already made the switch to later start times have experienced better attendance and grades, as well as a decrease in drowsy driving and dropouts. The only thing holding schools back from switching is conflicts with after school activities, transportation, and jobs. None of these excuses should run the school day. The question of "how can we create a safe and healthy environment for high school students?" should dictate when school starts. Therefore, I ask you to sign this petition to bring about change and to better the lives of high schoolers. Please continue to help solve this issue by reaching out to your congressmen and voicing your own opinion. Let's push school start times back to at least 8:30!