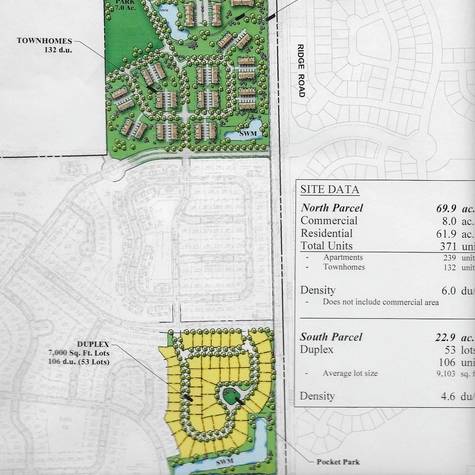 We are against changes to the original subdivision plat and zoning of land owned by Stahelin Properties within the Sable Ridge Subdivision located in Joliet, IL. Stahelin is proposing adding 239 rental apartments and 132 townhouses. The area owned between Bluestem and Black Rd. was zoned commercial and the original plat was for development of commercial in that area. The original plat and zoning called for Single Family homes and duplexes in the land owned between Theodore St. and Sable Ridge Dr. Stahelin is proposing that area be rental apartments mixed with townhouses. Stahelin is making this proposal in order to get the greatest financial return on their investment while ignoring the negative impact this will have on the existing subdivisions owners. Residents bought their properties with the understanding that the build out of the remaining land within the subdivision would be consistent with the original plat and zoning. The economic downturn has already turned many single family residences into rental properties. This has increased the pressure on home prices of which many residents are under water on their mortgages. Adding rental apartments would further deteriorate prices for existing homes and the family oriented nature of the subdivision. Please join in this petition to keep Stahelin Properties from making their proposed changes.