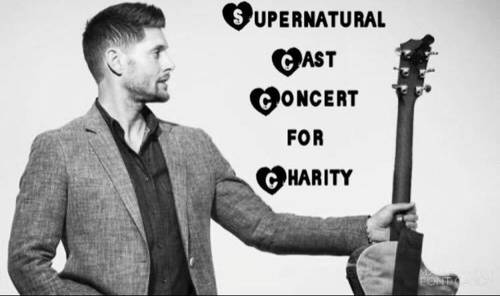 Ok so, I was inspired by Jason, Jensen, Robbie, Tim and Rich (forgive me if I missed someone) performing at Jailbreak and I thought to myself: Wouldn't it be cool to have a full length concert outside of conventions and StageIt? Where we could just go and have a blast and know that by doing so we're also giving back? YEA IT WOULD! I present to you: Supernatural Cast Concert for Charity. This would of course happen in Vancouver, with a live stream for the family that can't be there. Next, part of the proceeds would have to go towards cost, but the rest would either go to one charity or be split among the cast to go to separate charities.

Look, I know this is a long shot, but it's such a cool idea and I feel really passionate about it. I haven't felt this way in such a long time, actually motivated. Wanting to make something happen. I can't even put into words how much your support would mean to me. Maybe, just maybe, we can get this thing off the ground. The best way to do that is share share share! Spread the word! Send it to the cast! Post it on all social media! Please guys, let's do something awesome, let's create something out of nothing, something....SUPERNATURAL!