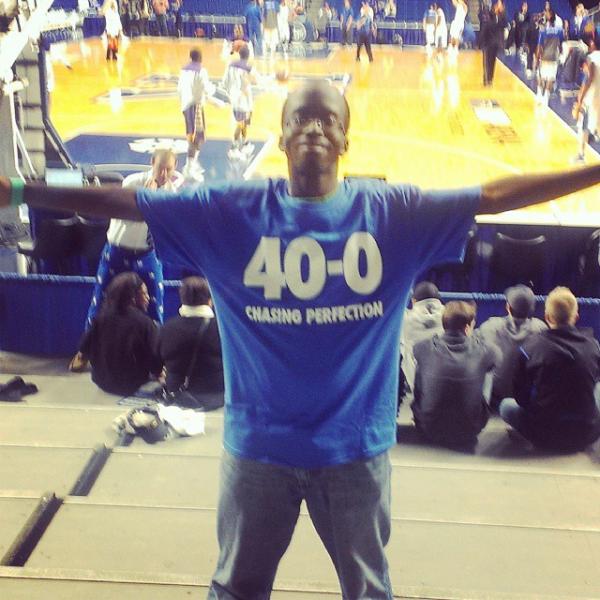 It has come to my attention that William Bolden (also known as Stone Cold Willow) has been banned from the eRupption zone student section. As I do understand Willow is currently not an official student of the University of Kentucky, he has been enrolled in courses before but had to put his academic endeavors on hold due to financial circumstances. I've carefully read the e-mail of complaints submitted by Nate Dillon that was sent to arena officials via John Clay's online blog. I believe there are a few invalid and unfair points in the letter that he wrote.

Mr. Dillon writes, "Throughout a game, Mr. Bolden shows a lack of awareness of his surroundings. He jumps around uncontrollably, which causes him to land on people’s feet, cell phones, jackets, etc." I find this statement to be unfair in the fact every student is jumping up and down during the games. As far as ‘cell phones’ go, I don’t know any person with common sense who would put their mobile device on the ground in a student section where individuals will be jumping up and down for a period of 2+ hours.

Another point Mr. Dillon makes is, “He also displays the most inappropriate vocabulary I have ever heard– so inappropriate that it makes the most foul-mouthed members of the eRupption Zone uncomfortable.” Who exactly is Mr. Dillon to rate and judge the level of vulgarity from a fan? Why is he not singling out the other ‘foul-mouthed members’ of the eRupption zone? There are plenty of hecklers at the game and I would guess most of the heckling and foul language probably comes from the student section, that’s the reality of college athletics.

Next Mr. Dillon writes, “As a student who has seen a generally high demand for student tickets for the last several years, I find it even that much more unacceptable that William Bolden, a non-student, is let into each UK basketball game under the identification of a student.” As stated earlier it is known that Mr. Bolden is currently not enrolled in courses at UK (or BCTCS), it’s also known that student ticket sales are down. Why not give one seat to UK’s most well-known fan. Although ‘most well-known’ sounds like an opinion it is certainly not far from a fact. Mr. Bolden has set up a 1 on 1 match with Nerlens Noel during the wait for Big Blue Madness tickets last season; he’s won a local dunk contest judged by John Wall, Josh Harrellson, and Randall Cobb, and thrown the first pitch at Lexington Legends games along with Terrence Jones who paid for extensive dental work for Mr. Bolden and also setup a college fund to help him get back into school. It is obvious Mr. Bolden is a staple when it comes to the Big Blue Nation. I personally know he does not come from the best home situation and UK athletics are all he really has to look forward to.

Another flaw I find in this whole situation is the fact Mr. Dillon speaks of 'growing annoyance'. William has been sitting in the student section as a non-student for quite some time now, almost two years. If the students felt annoyed by Mr. Bolden how come none of them went to an usher or arena security guard and aired their grievances? Why did arena staff not take it upon themselves to remove Mr. Bolden if they felt he was disturbing the rest of the student section? Two years seems like a long time to wait to take action. I would think a college age student would have the maturity and assertiveness to speak up. I feel Mr. Dillon is using the 'student only' angle to single out Mr. Bolden for a personal vendetta he has against him. There are others who make it into the student section who are not currently enrolled at the University yet Mr. Dillon seems to selectively ignore them and go after one individual, who has an intellectual disability I might add.

This is a petition to give special permission for William Bolden to be allowed to sit in the eRupption zone; and if that cannot be done I think it would be great to give him some type of honorary figurehead position as UK’s official biggest fan. This has been already done once for him with the Cincinnati Cyclones hockey team. He was their honorary member when he lived in Ohio and they always invite him back to partake in game rituals whenever he's in town. He puts his heart and soul into cheering for the Cats and never asks for anything in return; and by 'Cats' I mean all of the sports, not just the popular ones such as basketball and football. Instead of taking away the one thing that brings joy to his life, how about we embrace his enthusiasm and use it in a positive manner.