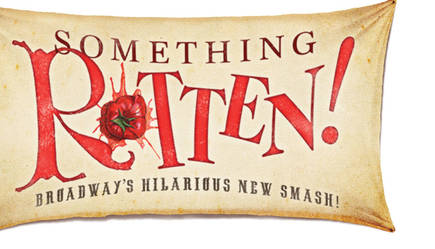 Something Rotten! Fan day and Sing-A-Long

Since it opened in April of 2015, Something Rotten! has attracted many fans who love the show so much that they keep on coming back. One of the best parts of Something Rotten! is it’s music – all of the songs are so clever and so catchy that they will be stuck in your head after you see the show. About a year ago in a video, the creators of the show Karey and Wayne Kirkpatrick have said that they would love to have a special show that is a sing-along in which the fans can sing along to their favorite songs in the show, and we love this idea and hope that it will happen. Waitress’ talkback in which they are doing karaoke with songs from the show have brought the idea of a Rotten! sing-along back in our minds. Whether it’s an actual show in which we are allowed to sing along, or a talkback after the show in which the music is played and we sing along, I think that it would be a great idea and a lot of fun. This would especially be fun for the fans who are devoted to this show and keep on coming back. It doesn’t matter if you’ve been to the show twice, ten times or thirty times, or if you’ve never seen it but love the cast album. To sit in the St. James with some of your best friends and make friends with other fans and sing the songs of one of collectively our favorite shows would be so much fun. Please sign this petition if you are interested in this idea so that we can make it happen!