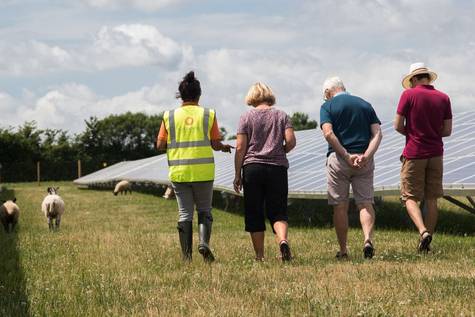 Yes to solar farm near Hutton

We have a small farm in Hutton, Essex, and we were approached by Lightsource Renewable Energy - a British solar energy company - with a proposition to install a solar farm in a field which is completely hidden from view, and away from roads and houses. The proposal is that this small, underused piece of land would remain green belt and also become multi-functional.

It would serve society by producing green, solar energy. It would remain in agricultural production by having sheep grazing amongst the panels, and it would benefit wildlife through seeding species-rich grasses and planting new hedgerows and trees. In addition to this we would allow schools to conduct field trips, with Lightsource providing educational packs and expertise.

The decision from Brentwood Council comes despite it being written in their own evidence base for the new local plan that to meet a 15% renewable energy generation target, renewable development would need to be within the Green Belt. The Government’s national policy also states that renewable energy development is not prohibited outright in the green belt, and it can therefore be used for renewable energy generation in order to meet Government targets where the environmental benefits outweigh any negatives. The National Planning Policy Framework 2012 (NPPF) states a presumption in favour of sustainable development. Paragraph 14 states that development should be granted unless the harm of doing so would significantly and demonstrably outweigh the benefits. In this case, the proposal would not result in any adverse effects to its surroundings or neighbouring residents, and the environmental benefits are clear.

Lightsource employed an independent company to determine if there were any brownfield sites in Brentwood which would be suitable for the development and they could find none which would generate an equivalent energy output.

Some councils are pledging to be completely green and carbon free by the year 2030, but Brentwood Council have no large scale renewable energy sites and none planned.

The problem we have as a small island is that we have a constantly increasing population who will all require homes, hospitals, offices and factories. This will put an increased burden on our energy supply. Land in Great Britain is a scarce resource and if we can therefore make land multi-functional we have to do it. That’s why this solar farm proposal is so ingenious.

We have taken the planning application to Appeal and I was very hopeful it would be approved by the Planning Inspectorate. However, we have recently been advised that it is now being decided by the Secretary of State for Communities and Local Government.

If you are a supporter of renewable energy, please sign this petition. It will be sent to the Secretary of State to demonstrate that our community values clean energy generation, and that we would like to see this well-hidden site become multi-functional and host both agriculture and solar energy generation.

Please Clink On The Link Below To Find Out More Information