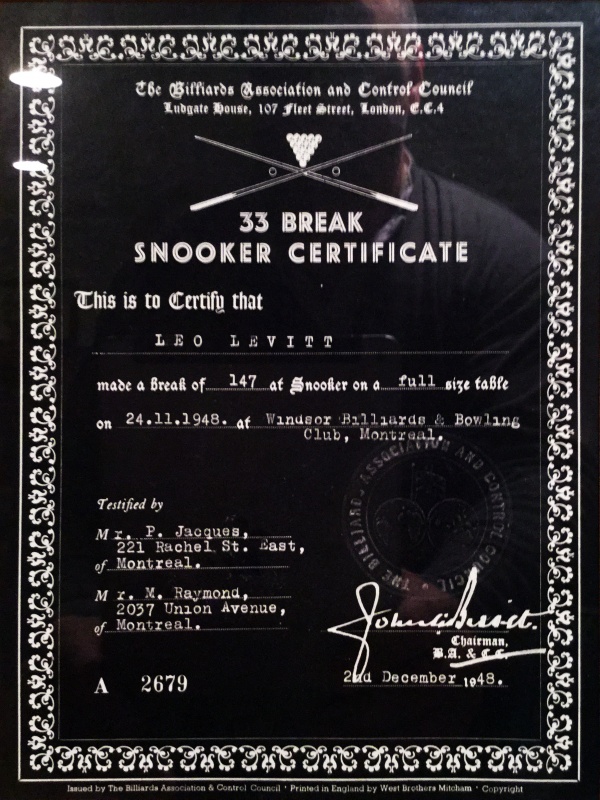 Guinness World Records states that the first "officially ratified" perfect game in snooker was made by Joe Davis in 1955.

With all due respect to Joe Davis, who was an incredible snooker player, this record actually belongs to a gentleman from Canada named Leo Levitt, who made the first "officially ratified" 147 maximum break on November 24, 1948 in Montreal, Canada.

The irony is that Joe Davis acknowledges Levitt's 147 in a newspaper article shortly after Levitt completed this monumental feat.

The organization that ratified Levitt's maximum was The Billiards Association and Control Council. The record that Guinness World Records published does not state which organization ratified Joe Davis' maximum, however, it must have been the same organization, since they were the only ones back then.

When this information was forwarded to the head office at Guinness, it was completely ignored. After reaching out again on numerous occasions, this was once again ignored and of course, never rectified.

By signing this petition, you are not simply defending the truth, but you are also defending the values that go hand in hand with the beautiful game of snooker.

History is not history unless it is the truth. Abraham Lincoln