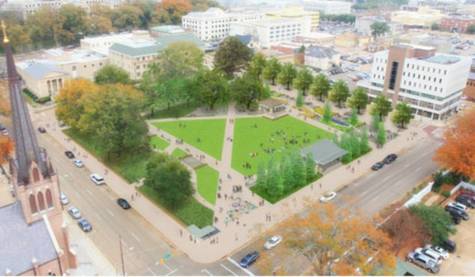 422 people have signed this petition. Add your name now!

Established as a public commons in 1838, Smith Park in Downtown Jackson is one of the oldest continuously used city parks in the United States -- pre-dating both the historic New Orleans City Park and New York City's sprawling Central Park.

Smith Park, named after colorful benefactor and Scottish transplant James Smith Jr., is the only surviving public square from the original 1822 plan for the city of Jackson.

From the beginning, that single public square has been witness to the founding of Jackson as a state capital, the establishment of the city’s first park, the American Civil War and the American Civil Rights Movement, failed plans for its destruction and now its rebirth as one of the city's brightest ornaments. After decades of use since the renovation in 1973, this 2.4 acre park has become outdated - many of the trees have reached the end of their lifecycle, the hardscape and furnishings have deteriorated.

Over the last few years a group of downtown stakeholders came together to address the problem. This group, Friends of Smith Park, through a series of public meetings and gatherings to collect input from property owners, businesses, residents and visitors from the fall of 2013 to the spring of 2014, has developed a plan and budget to transform this park into a world class public space.

We need your help. TeamJXN is partnering with Friends of Smith Park to help gain support from people who live, work and socialize in Jackson - people who understand how critical a state-of-the-art park is for our city. We will be going to lawmakers and key community stakeholders with this petition to show how the community overwhelmingly supports this project. Please sign this petition below to show your support for making this project a reality in 2016.